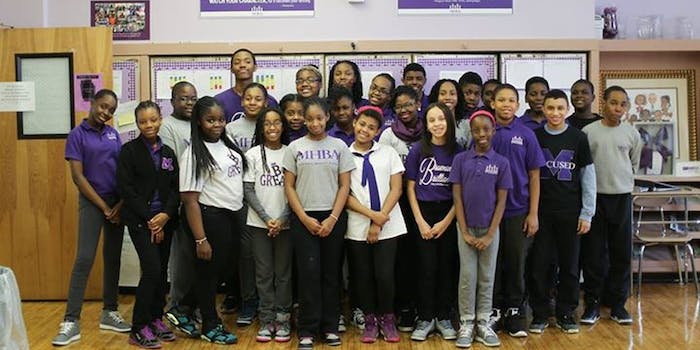 Humans of New York is raising money for Brooklyn schoolchildren

The community has raised hundreds of thousands of dollars, little by little.

Brandon Stanton, photographer and creator of Humans of New York, has documented life on the streets of New York for more than four years. His photos reveal everyday people and their inspiring or heartbreaking stories, to the delight of his millions of followers.

On Jan. 19, Stanton shared a photo of a young boy, who told Stanton that the most influential person in his life is Ms. Lopez, his school principal. He described Ms. Lopez as someone who goes to great lengths to make sure her students learn and know that they are special. The photo received over 1 million likes, and his story inspired hundreds of thousands of people.

Stanton decided to find Ms. Lopez to ask her about Mott Hall Bridges Academy in Brownsville, Brooklyn, which has the city’s highest crime rate. He found a tough neighborhood with an even tougher principle: Nadia Lopez makes sure her scholars—she doesn’t call them students—have a safe and supportive place where both the mind and spirit are nurtured.

In the Facebook and Instagram comments on the photo, people asked how they could support Ms. Lopez and other students like the one Stanton interviewed. After brainstorming with colleagues, the group decided that the best way to help the kids was to show them there are opportunities for them outside their community, and decided to raise money to take each incoming sixth grade class on a trip to Harvard University.

Stanton, Ms. Lopez, and the Academy’s instructors figured it would take about $30,000 to send the class to Harvard each year, and set a goal of $100,000, good for three years of the program. Ms. Lopez described the importance of the project to Stanton:

This is a neighborhood that doesn’t necessarily expect much from our children, so at Mott Hall Bridges Academy we set our expectations very high. We don’t call the children ‘students,’ we call them ‘scholars.’ Our color is purple. Our scholars wear purple and so do our staff. Because purple is the color of royalty. I want my scholars to know that even if they live in a housing project, they are part of a royal lineage going back to great African kings and queens. They belong to a group of individuals who invented astronomy and math. And they belong to a group of individuals who have endured so much history and still overcome. When you tell people you’re from Brownsville, their face cringes up. But there are children here that need to know that they are expected to succeed.

The Indiegogo campaign blew past its goal in a matter of hours. At the time of publication, it’s raised more than $500,000, and since it’s secured enough funding for the Harvard trip to become a permanent part of the Academy’s curriculum, the school has now decided that every $40,000 raised beyond the initial $350,000 collected in 24 hours will go to a desperately needed summer program.

It’s just too dangerous to be outside, so my scholars stay inside all summer. They aren’t learning to ride horses or drive boats, and they certainly aren’t traveling. They miss out on the enrichment available to children from more affluent neighborhoods. They need a safe place where they can do activities and continue to grow their minds. I tried to put together a program last summer, but I couldn’t afford it. I couldn’t really put together any activities, and I could only use teachers-in-training. I need the funds to put together a program with my own teachers so my students have a safe place where they can continue to grow outside of school.

I’m a huge fan of Humans of New York, and was inspired by Ms. Lopez’s story. I donated $10 to the campaign, and noticed that most of the donations rolling in were small, incremental amounts, likely from people who like Humans of New York on Facebook and, like me, want to make a difference in a child’s life.

As time went on, a few $100 donations were collected, but for the most part, small donations came pouring in from thousands of people who wanted to give away whatever they could spare.

It struck me as different from traditional crowdfunding campaigns. Lots of startups turn to Indiegogo or Kickstarter to get their products off the ground. Usually there’s a prototype of a project that will get sent to backers, and it comes with a hefty price tag. Even for social good fundraisers like those hosted by nonprofit organizations, the average donation is $88, according to 2013 data.

The average donation to Humans of New York’s fundraiser for Mott Hall Bridges Academy is $27, much less than other for-good fundraisers.

This hugely successful campaign illustrates just how powerful online communities can be. Stanton has grown his following on Facebook to almost 12 million people, 2.4 million people on Instagram, and 221,000 on Twitter. Through powerful images and compelling stories, Stanton lets the Internet into the lives of strangers, where we witness a side of humanity so often hidden from the public.

People regularly look at the photos Stanton posts and ask, “What can we do to help this person?” Commenters routinely ask about about crowdfunding, but this time those aspirations came to fruition, and by way of small, reasonable contributions. Some aren’t even sending money: A few supporters even sent flowers to the Academy to show their appreciation for the teachers and administrators helping to make the school a safe place in a dangerous neighborhood.

It’s only day three of the campaign, and it’s obliterated expectations. There are still 13 days to go, and at this rate, students in Brownsville, Brooklyn will soon have a summer program they can feel safe in for years to come.

Photos by Humans of New York/Facebook