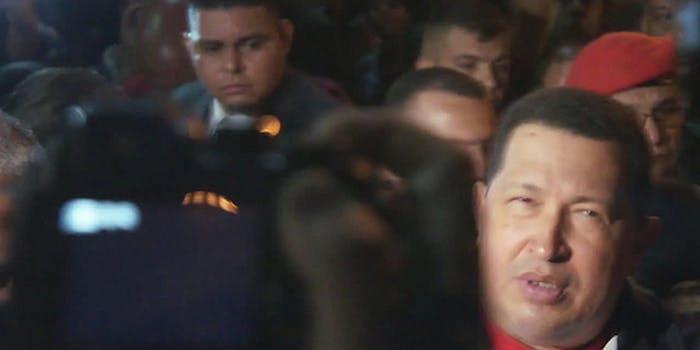 It seems unlikely that his legacy of destroying freedom of speech, both online and off, will perish with the late Venezuelan president.

Venezuelan President Hugo Chávez died Tuesday, after a long battle with cancer. Social media has responded to his death in a most unsurprising fashion.

The left has unleashed encomia characterized by the same willful blindness that has led them to declare Cuba’s Che Guevara a hero, even as they ignore his excesses, such as confining homosexuals to prison camps.

The right, on the other hand, has celebrated the death of a man who they see as a simple-minded anti-American demagogue.

Neither group has made much mention of Chávez’s arguably most unpleasant, and influential, legacy. From the outset, Venezuela’s president has acted against freedom of speech, ranging from shutting down TV news networks to railing against opposition Twitter posts.

Here is a far from complete digest of Chávez’s anti-free speech actions, including measures against online speech. Given the historical unwillingness of leaders to roll back any measures their predecessors have taken that accrues greater power to the office, even when that predecessor is ideologically his or her antithesis, these actions, and the strategy of taking action against opposition speech in general, is likely to mark Venezuela for at least the near future.

After unilaterally declaring 23 television stations were suddenly “national” broadcasters, Chávez demanded that they all broadcast government statements. When six of them, led by RTC, refused, he had them all shut down by pressuring the cable networks that carry them to drop them from broadcast. RTC had moved to cable in 2007, after Chávez refused to renew their “terrestrial” broadcast license.

“The Internet is a battle trench because it is bringing a current of conspiracy,” Chavez proclaimed. “The Internet cannot be free,” All this after the hashtag #freevenezuela took root in the wake of the TV station shutdowns. Seven of the top 10 Twitter accounts in Venezuela at this point were critical of the president.

Declaring the Internet needs state control, he announced plans to route all Internet traffic through the state telecommunications company, which he controls.

April 2010: TV reporter and cameraman detained and their materials confiscated

A Venezuelan TV reporter and her cameraman were detained twice by police and National Guard, who attempted to seize all of their reporting materials. They were working on a story about Columbians who had been detained by the government.

After condemning Twitter as inherently dangerous to the state and its people, the president changed his mind, or at least his rhetoric. Twitter is dangerous when wielded by people other than Chávez and his supporters.

The keystone of Chávez’s control over online speech was given the Orwellian name of “La Ley de Responsabilidad Social en Radio, Televisión y Medios Electrónicos” (or “The Law of the Social Responsibility of Radio, Television and Electronic Media“).

The law forces ISPs to be legally responsible for all the content that is carried by their systems; specifically, they are legally liable should any content appear that contradicts government wishes, as determined by a government-appointed overseer.

This includes material that “encourages and promotes hatred and intolerance for religious, political, and gender difference,” that “fosters unrest among the citizenship or disturb public order” or “refuses to recognize the government’s authority,” “disregards the legitimate authority” or “use(s) anonymity,” that bugbear of the authoritarian mind.

The law also established a “Network Access Point” controlled by the government.

The pro-government hacker group N33 hijacked the Twitter account of telenovela writer and critic of the president, Leonardo Padrón. The account was marked N33 and began to issue tweets that were critical of Padrón and other critics of Chávez.

According to the Committee to Protect Journalists, the free speech group Espacio Público “documented 30 cases of hacking against journalists, writers, human rights activists, and opposition politicians” with an additional 14 by late August of 2012.

Globovisión questioned whether the inauguration of Chávez to his latest term of office could take place under Venezuelan law without the president being physically present in the country, as the government maintained it could. Chávez had been undergoing cancer treatment for months in Cuba. He would return in February, the swearing-in having been postponed.

The country’s national intelligence police also raided the home of a businessman, Federico Medina Ravell. Ravell has been “repeatedly denounced on state television as the supposed author of tweets questioning information the government has provided on Chávez’s health.”

Venezuela’s attorney general announced that Medina, who was away at the time of the raid, was now under investigation for the wildly histrionic charge of “instigating terrorism in social networks.” The police detained Medina’s wife and children for several hours and took two computers from his home.

Extravagant moves were still being made with impunity by government representatives long after Chávez was likely to have been able to direct any of their actions. So it seems unlikely that his legacy of destroying freedom of speech, both online and off, will perish with him.