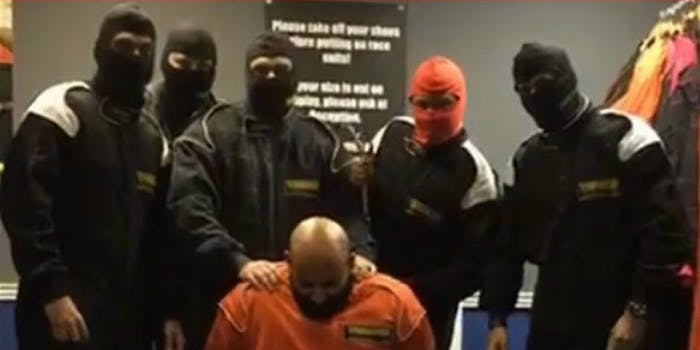 Whatever you do, don't do this.

Here’s a quick reminder in case, for some reason, you need one: When you’re at a company retreat, plenary, work conference, or office holiday party, don’t dress up like a terrorist organization and pretend to kill a hostage. It might seem funny at the time, especially if Johnnie Walker and Jack Daniels are your bosses for the evening and Johnnie brought along his pet, Grey Goose, and Jack’s bodyguard, Beefeater, is also in the house.

But I assure you, it’s not funny. And if it gets out into the public, you’re probably going to lose your job.

That’s what six employees from HSBC have learned when, after filming themselves pretending to execute a prisoner while wearing ISIS garb, they were fired after the video was posted on Instagram.

The video that was deleted but still obtained by the Sun can be seen here where the six bankers pretended to execute a colleague who they call Saf Ahmed while yelling “Allahu Akbar” (“God is great,” in Arabic).

The workers apparently were at a team-building field trip at an indoor go-kart track in Birmingham, England, that was organized by the behemoth bank. Instead of a knife, the men were using a coat hanger as their pretend weapon.

Unfortunately for the jokesters, the British public hasn’t forgotten the beheadings of U.K. aid workers David Haines in September 2014 and Alan Henning in October 2014 at the hands of ISIS. Neither has HSBC.

Screengrab via The Sun