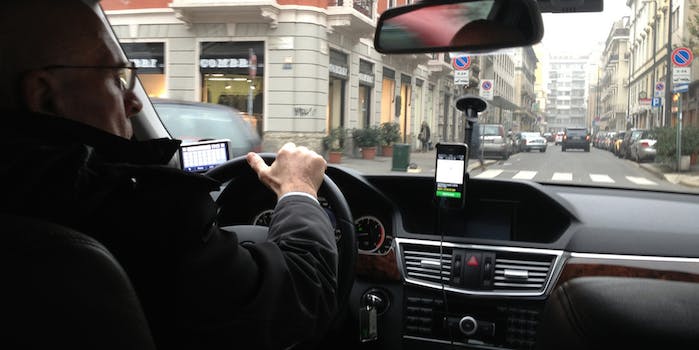 How to get a good rating from your Uber driver

A Monday morning post on Medium, revealed a simple hack that meant users of the ridesharing service Uber could discover how they had been rated by its drivers. While Uber quickly patched the vulnerability, once again obscuring the ratings from public view, this hole in the company’s security drew attention to a relatively little known fact: Ridesharing services like Uber and Lyft don’t just let passengers rate drivers, they also let drivers rate passengers.

Having drivers rate passengers actually makes a lot of sense. If carting a particular passenger around is consistently an enormous hassle, then being able to see that person’s low rating will mean that drivers will be able to avoid picking them up—clearly a boon for drivers’ professional and psychological health.

Additionally, drivers who give passengers low ratings will never be paired with them again.

In a 2012 Quora post, Uber engineer Dom Narducci explained that even though the company makes driver ratings public, it doesn’t do the same for passenger ratings. ?I know our users are all amazing and would never do such a thing but its not infeasible to see a customer harass a driver they’ve had previously for giving them a bad rating,” he wrote.

If you’re a regular user of ridesharing services, keeping a solid passenger rating is a good idea and, even though you aren’t able to actively monitor it, ensuring that rating stays relatively high isn’t all that difficult.

I reached out to Lyft and Uber drivers, both in person and via Reddit, to see what sorts of things make them give a passenger a bad rating and, conversely, what will guarantee a perfect score.

While most drivers noted that truly bad experiences are few and far between, almost everything about being a good, responsible passenger can be boiled down to ?don’t be an asshole.”

Nevertheless, here are some specifics:

The single most common complaint among drivers is about passengers who call them to a specific location and then make them wait. Every minute a driver has to sit idling on a street corner waiting for a passenger to come out of their apartment is a minute they’re not making money. The best way for passengers to handle this is to only call for a ride when they’re actually ready to go.

Liefer suggests checking the app about 20 minutes before you actually need a ride to see how many cars there are in the area. If there are a lot, you can be reasonably certain that you’ll get a pickup within a couple minutes of signaling that you want one. But, if there aren’t any in the immediate vicinity, you can put out your digital hail with a longer lead time. This strategy is particularly useful if there’s inclement weather that makes standing outside in the rain/snow/sleet/torrential downpour of frogs/cold for long periods of time an unattractive option.

Think before you drop the pin

The Lyft and Uber apps allow passengers to select the exact spot where they want to be picked up. To appropriate the wisdom of Peter Parker’s Uncle Ben, with this great power comes great responsibility.

Before dropping the pin in any random spot, stop and think about the location for a few seconds. Make sure you’re not directing the driver to pick you up someplace where it’s dangerous or illegal for the driver to stop. Selecting a spot that’s around the corner from a busy thoroughfare, rather than in the middle of the thoroughfare itself, would likely make everyone’s life just a little bit easier.

One easy way to get a low rating is to cause any physical damage to the driver’s vehicle. One common complaint was about people who slammed doors without a second thought.

Redditor u/HectorMagnificente recalled one particularly egregious example of a passenger not respecting a driver’s vehicle:

I once had a young gentleman, business type, that I picked up from a hotel going to the airport. I had noticed that he was writing in a notebook with a very fancy looking pen. As I looked over my shoulder to check a blind spot, I noticed that he was stabbing his pen into my upholstery. I immediately asked him to stop and reminded him that this was my personal vehicle. He just sighed and rolled his eyes. He didn’t even apologize or offer to pay for the damages. Luckily, Uber has a an option to document damages done to your car by passengers and I took photos immediately after for my personal records. But that’s a guaranteed way of getting a bad rating by a driver. I can handle rudeness or the drunk aggression I come across when working. It’s the total disregard of my personal property that will get you a bad rating from me.

As u/JSnow789 noted, chowing down and leaving a big mess all over the place is also a no-no:

The only non-5 star rating I’ve given since I started driving in June was because a woman let her son eat cookies and crackers and left an incredible mess all over the back seat and floor. I had to stop driving and vacuum up the mess. She got a 3.

If you wouldn’t do something in a traditional taxicab, chances are your ridesharing driver would appreciate if you refrained from doing it too. Prime among those things is smoking. Unless your driver has a parliament light dangling from his or her lip when he or she picks you up, wait until you get out of the car before lighting up.

E-cigarettes vaporize tobacco rather than burning it, which allows smokers to get their nicotine fix without making wherever they are smell like a 1950s bowling alley. Even so, don’t assume your driving is automatically cool with you puffing away like you’re some kind of  futuristic bounty hunter. Some drivers may be okay with e-cigs, but ask before pulling one out.

Mind your Ps and Qs

Seriously, a little politeness goes a long way. If you make you driver wait, apologize. If he or she offers you some water or a piece of candy, express gratitude. What would your mother say?

Cars are not bars

Unless you’re in one of the small handful of states where it’s legal for automobile passengers to ride with open containers of alcohol, don’t try to sneak booze on board. Doing so not only puts the driver at risk of getting a ticket, but also places them in the awkward position of having to be a buzzkill, which could hurt their own ratings. Driver ratings are even more important than those of passengers because drivers with low cumulative scores get kicked off the networks as a method of quality control.

If you smell bad, be extra nice to make up for it

Redditor u/lordrefa takes off points on a passenger’s rating if they smell gross:

The most common thing I reduce my passenger’s rating for is smell. If they smell strongly of body odor, foot odor, or even perfume or cologne they lose a star or two.

However, gassing up the car with nasty B.O. isn’t a guaranteed recipe for a poor rating. ?I did have one guy who smelled really bad,” recalls Sheena Barbour, a Lyft driver in Colorado, ?but he was still nice so I didn’t lower the rating.”

So, if you’re coming back from the gym, showered and sweaty, or just forgot to put on deodorant today, be extra friendly to make up for it.

It never hurts to ask

The needs of every Uber or Lyft passenger aren’t the same. Maybe you have a massive amount of luggage or a dog tagging along. Or maybe you need to get a wheelchair or a snowboard into the car. Some ridesharing apps give passengers the ability to send a message to the driver on his or her way to pick them up. Sending a note about any unusual needs you may have is a great way to get on their good side and also avoid having to wait around for a ride only to discover that it can’t accommodate you.

Thanks for the tip

In a blog post on its website, Uber insists that tipping isn’t required; however, drivers do appreciate it.

Redditor and Uber driver u/eternalkenny gives every passenger a four out of five unless they tip. ?Let’s face it, it’s BS [sic] that we don’t get tips, we work in the service industry,” u/eternalkenny writes, ?Yes it’s up to the client if they want to tip but hey it’s up to me to tip when I go to a restaurant right and I always tip.”

WE DO NOT GET TIPS FROM UBER, in fact we get messed with a lot – device fees, constantly changing rates and commission percentages (almost always not in the drivers’ favor), and yet Uber pretends as though some tip is included in the fare.

Don’t treat your driver like your own personal drug mule

Liefer recounts the lowest rating she ever gave to a passenger was to a guy who was being extremely sketchy:

I once drove a dude all around Oakland and he kept going into buildings and making me wait outside. Then his friend got in and they were clearing talking around something in their conversation that they didn’t want me to know about. At one point, he got out of the car and started loudly arguing with a woman on the street about something. At the end, I dropped him off around back of a Motel 6. I wasn’t entirely sure what he was doing; but, whatever it was, it was bad news.

On a related note, u/OaklandWarrior gives a bad rating to anyone who is ?doing coke in the back of my car.” So don’t do that either.