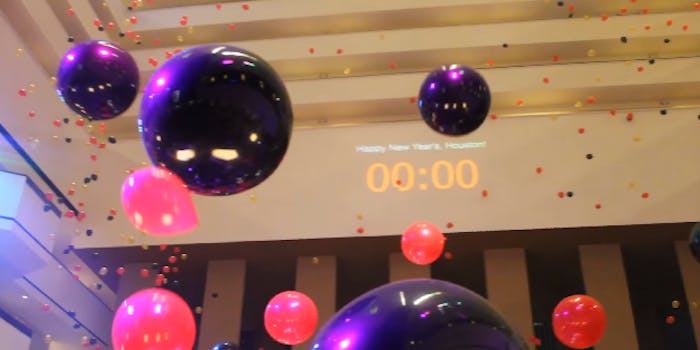 Houston Police Department officers arrested an intoxicated man Sunday who was allegedly engaging in “disorderly conduct” at the bar of the Hyatt Regency hotel. Upon searching his hotel room to gather his belongings, police reportedly discovered a trio of guns, including an AR-15 rifle, and “lots of ammo,” according to local reporter Jacob Rascon of KPRC.

While there hasn’t been any official word whether the arrested man had any violent plans or intent, the timing of the arrest, as well as the reported cache of arms and ammunition in his hotel room and the room’s location, has drawn scrutiny and alarm. As the Hill detailed on Sunday, the Houston Hyatt Regency has a major event planned for New Year’s Eve on Sunday night, with hundreds planning to attend the annual balloon drop.

Police initially planned to arrest the man for disorderly conduct. Hotel staff said he was drunk at the bar, and refused to leave. Officers and staff found the weapons and ammo when they went into his room to grab his belongings.

According to Rascon, the man’s hotel room overlooked the area where the celebration is slated to take place, and his truck in the hotel parking lot has since been seized by authorities. Art Acevedo, the chief of the Houston police, released a statement on Twitter on Sunday morning saying that there is “no specific threat” to the city and thanked those who reported the suspicious incident to the authorities.

Situation from this morning at downtown hotel is contained. No specific threats to @HoustonTX. @houstonpolice will be heavily deployed throughout the city to include SWAT react teams. Proud of officers & Hyatt. As always be vigilant & report suspicious a activity to authorities.

The specter of mass shootings in hotels, festivals, and other high-profile events has become ingrained in the American consciousness during the past several months, thanks in part to the hyper-lethal assault in Las Vegas earlier this year that left dozens dead and more than 500 people injured.