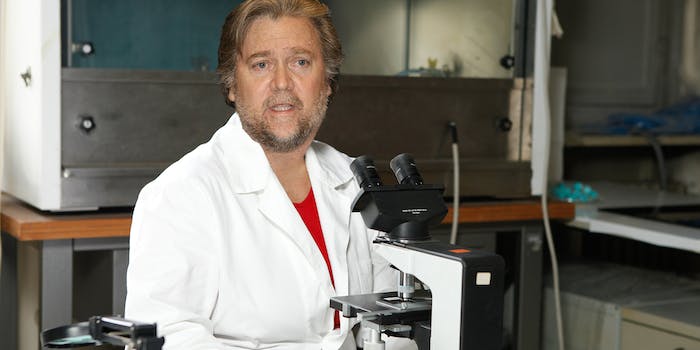 Even Bernie Sanders had a harsh burn.

We now know what science is going to look like under President Donald J. Trump.

The House of Representatives Committee on Science, Space, and Technology on Thursday tweeted a Breitbart News article that casts doubt on the reality of climate change.

The article cites U.K. tabloid the Daily Mail, which reported on a study that found global temperatures fell by 1 degree Celsius since the middle of this year. The paper’s report puts the theory of human-caused climate change in question, and suggests that an El Niño weather patter caused historically high temperatures in 2016.

Problem is, one study’s findings—as accurate as they may be—is not the same as fact, and climate scientists overwhelmingly believe 2016’s high temperatures are indicative of climate change, and that human activity contributes to climate change.

“The current warming trend is of particular significance because most of it is very likely human-induced and proceeding at a rate that is unprecedented in the past 1,300 years,” says NASA.

In response to the tweet, Democratic and independent members of Congress derided the House committee for championing conspiracy theories.

Where'd you get your PhD? Trump University? https://t.co/P5Ez5fVEwD

It's the House SCIENCE Committee, not the climate change denial committee. Bring back the science! https://t.co/W9SHzdBmEb

Looks like we need to put the "science"' back in Science, Space & Tech. Maybe @Scripps_Ocean can clarify a few things on #climatechange… https://t.co/yvk0bIU2Sp

So, @NASAGoddard or Breitbart? The science is clear – these aren't the records we want to be breaking. #ClimateChange is a real threat. /2 https://t.co/rtzZQUeSRE

This is embarrassing. Even for the so called "Science" committee majority. #ActOnClimate https://t.co/iR0BY5YQ2C

Adding to the lawmakers’ dismay is the fact that Steve Bannon, co-founder of Breitbart and the Trump campaign’s CEO, will serve as the president-elect’s chief strategist. But the House Science Committee, led by Rep. Lamar Smith (R-Texas), has regularly championed beliefs not held by the scientific community at large.