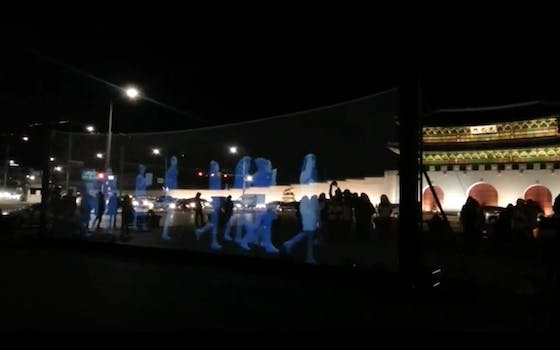 Ghosts of the future.

On the third anniversary of South Korean President Park Geun-hye’s election, there were few citizens on the streets of Seoul but they were filled with protestors. The crowds gathering in the city weren’t people, but holograms.

The human-sized holographs were projected onto a transparent screen and marched in front of Gwanghwamun Square, a building of historic significance to South Koera as it served as the the location of royal administrative buildings and features statues of famous figures from the country’s past.

Organized by Amnesty International, the protest took place to address the government’s crack down on free speech. South Korea has attempted to ban protests and free assembly.

Amnesty International’s protest was not designed to be led by holograms; the organization asked for permission to hold a human rally but was denied by the Seoul Metropolitan Police, which claimed the demonstration would cause traffic problems.

In response, Amnesty International created the digital demonstration by recording 120 volunteers on a blue screen. Their image was projected, and the supporters who uploaded upload recordings to the Amnesty website provided voices for the virtual bodies. The holograms marched for 30 minutes, chanting things like, “promise us democracy,” and “promise us freedom of assembly.”

Police made it clear that anyone who may want to participate alongside the holograms that they would be punished for doing so. “We will restrain anyone who chants along to the hologram or expresses a collective will. That in and of itself is a demonstration,” Chief Lee Sang-won said at a news conference according to NPR.

Last year, police blocked demonstrators who took to the streets to criticize the government’s handling of the deadly Sewol ferry accident, which resulted in nearly 300 deaths.