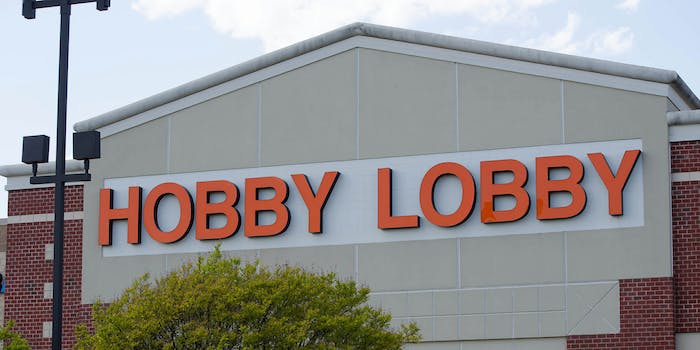 Hobby Lobby bought 5,548 artifacts for $1.6 million, according to the DOJ.

Hobby Lobby, the arts-and-crafts chain behind a controversial Supreme Court decision, has agreed to forfeit artifacts that it falsely labeled ancient cuneiform tablets and clay bullae that were imported from Iraq.

The store began to assemble a “collection of historically important manuscripts, antiques, and other cultural materials” in 2009, according to Department of Justice officials.

In 2010, Hobby Lobby purchased artifacts from a dealer who falsely labeled the shipments as “ceramics” and “samples,” according to the complaint, after a consultant inspected the artifacts.

The consultant warned Hobby Lobby executives that acquiring cultural property from Iraq was risky because objects may have been looted from sites in the country. The problem has taken on greater weight due to the pillaging and sale of artifacts in Iraq by members of the so-called Islamic State, which has made millions of dollars from these sales to fund its attacks.

Hobby Lobby bought 5,548 artifacts for $1.6 million, according to the complaint, and was “fraught with red flags.”

The shipments, sent to three different corporate addresses for Hobby Lobby in Oklahoma City, Oklahoma, were labeled “ceramic tiles,” or “clay tile (sample).” They were eventually seized by Customs and Border Protection agents.

Hobby Lobby has been known to promote evangelical Christianity and was at the center of a major Supreme Court case in 2014 regarding family-owned corporations paying for contraceptives under the Affordable Care Act. The Supreme Court’s decision ultimately helped break down certain birth control coverage options under the ACA.

Hobby Lobby will have to pay a $3 million fine, according to the Justice Department. It has also agreed to “adopt internal policies and procedures governing its importation and purchase of cultural property, provide appropriate training to its personnel, hire qualified outside customs counsel and customs brokers, and submit quarterly reports to the government on any cultural property acquisitions for the next eighteen months,” the DOJ said.

“American collectors and importers must ensure compliance with laws and regulations that require truthful declarations to U.S. Customs and Border Protection, so that Customs officers are able to scrutinize cultural property crossing our borders and prevent the inappropriate entry of such property,” Acting United States Attorney Rohde said in a statement. “If they do not, and shippers use false declarations to try to clandestinely enter property into the United States, this Office and our law enforcement partners will discover the deceit and seize the property.”