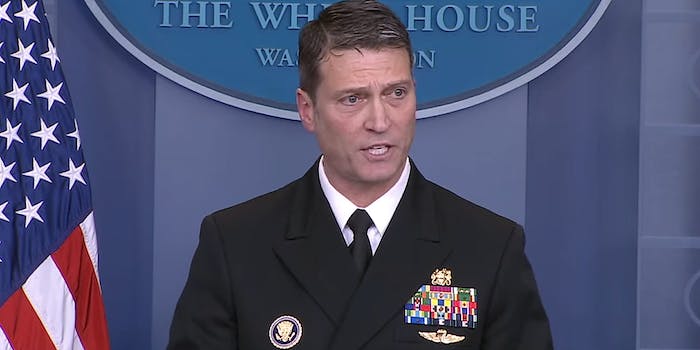 When prospective Secretary of Veterans Affairs Ronny Jackson withdrew his nomination on April 26 in the face of allegations of drinking on the job and fostering a hostile work environment, he joined an exclusive club. It’s full of people brought down by scandal, partisan rancor, and sordid histories of boozing and tax evasion: failed cabinet picks.

Trump promises “extreme vetting” of all immigrants, but he's repeatedly failed to hold his own Cabinet picks, senior White House staff and judicial nominees to the same standard. Ronny Jackson is just the latest example of a bigger due diligence problem. https://t.co/TpAT3IoN9W

Since 1801, just 24 cabinet nominations have either been rejected by the Senate, been withdrawn by the president, or withdrawn themselves. These failed nominations are a fascinating snapshot of the political situation in the country, and the increasing scrutiny that cabinet nominees found themselves under.

Nine nominees have failed an up or down vote in the Senate, the first being Roger Taney, Andrew Jackson’s recess appointment for Secretary of Treasury. When the Senate returned, they rejected him by a 2-1 margin, due to his stance on central banking.

The next rejections all came during the accidental presidency of John Tyler, the first vice president to ascend to the presidency, which came after William Henry Harrison’s death. The Senate, who spent nearly four years feuding with Tyler over virtually every aspect of his presidency, rejected four Tyler nominees in 16 months—necessitated by Tyler’s entire cabinet resigning rather than serving under him.

6 of the 12 Cabinet nominees that have been defeated in U.S. history were nominated by John Tyler. Four for Treasury plus Navy and War.

One nominee, prospective Treasury Secretary Caleb Cushing, was rejected three times in one day in 1843, with the last vote being almost unanimous. Tyler’s failure to get nominees through gave great comfort to his enemies, with famed former senator and Speaker of the House Henry Clay telling a friend that “no part of the [Senate] actions has afforded more satisfaction than the rejection of Cushing.” The Senate would get one last chance to reject Cushing, forcing his withdrawal as a Supreme Court nominee in 1874.

It would be another few decades before a candidate was again rejected, with Andrew Johnson’s pick for Attorney General blocked by the Senate in 1868 in a truly bizarre saga.

Henry Stanbery had already been appointed and confirmed as Attorney General in 1866. He served two years, then resigned to defend Johnson during his impeachment trial. Once Johnson had skirted removal from office (by a one-vote margin), Johnson nominated him to not only re-take the Attorney General position, but also to a Supreme Court seat.

1925 would see the next rejected nominee for the Cabinet, with Calvin Coolidge’s pick for Attorney General voted down twice in a ten-day span. Charles B. Warren was qualified for the post, but was also accused of being involved in price fixing in the sugar industry, and with the country still recovering from the Teapot Dome scandal of the Warren G. Harding years, no hint of impropriety could be allowed in the Cabinet.

There would be just two more Cabinet picks to fail up or down votes going forward.

Lewis Strauss was narrowly voted down to be Dwight Eisenhower’s Commerce Secretary in 1959, after a controversial tenure as chair of the Atomic Energy Commission, and a contentious hearing where Strauss was called “evasive, quibble-some, and not above beclouding a point with big handfuls of debater’s dust.”

And in 1989, John Tower was rejected as Secretary of Defense to George H.W. Bush, brought down in much the same manner as Ronny Jackson—allegations of heavy drinking, even during Senate votes.

Tower’s failed voting would signal a sea change in the vetting of Cabinet nominees.

Back in 1989, ex-Sen. John Tower's nomination for Secretary of Defense was derailed by rumors he was an alcoholic and, in a now-dated term, a "womanizer."

It was the first time the Senate voted down a Cabinet nominee in 30 years; it hasn't done so in the nearly 30 years since. pic.twitter.com/Melw5l7Fve

Before 1989, just three had been withdrawn: Secretary of War nominees Lucius Stockton in 1801, Henry Dearborn in 1815, and Thomas Ewing in 1868. Stockton refused to accept the nomination, and the others were pulled by the nominating president due to the Senate signaling they’d reject them.

But after Tower, there would be 12 withdrawn nominations, starting in 1993. They show how little leeway presidents of opposing parties were given by hostile legislatures, and how minor improprieties that would have been glossed over instead became nomination-killing issues.

Bill Clinton had five nominees withdraw before Senate hearings. Two, Zoe Baird and Kimba Wood, were successively pulled as nominees for Attorney General after having been found to have hired undocumented household workers. The ensuing “Nannygate”  was one of many scandals and conspiracy theories that continue to hound the Clintons and those associated with them.

A year later, Clinton’s pick for Defense Secretary, Bobby Ray Inman, dropped out after alleging that Bob Dole and the New York Times were teaming up to smear him, and declaring he didn’t want the job. Anthony Lake’s 1997 nomination to head the CIA collapsed in the face of stalled and contentious committee hearings, while Hershel Gober’s nomination to run the VA was pulled in the face of allegations of sexual harassment and conflicts of interest.

And Barack Obama’s early years ran into the same vetting problems that Bill Clinton had, with three Obama cabinet picks all being pulled before their hearings in 2009.

Tom Daschle pulled out of his Health and Human Services nomination over $140,000 in unpaid taxes, and two successive Commerce Secretaries never made it to hearings: Bill Richardson, over unsubstantiated pay-to-play allegations; and Judd Gregg, who took himself out of the running after disagreeing publicly with Obama over the Stimulus package.

Ronny Jackson isn’t even President Trump’s first withdrawn nominee, as prospective Labor Secretary Andy Puzder took his name out of the running due to allegations of spousal abuse.

It is so pathetic that the Dems have still not approved my full Cabinet.

With the partisan rancor that’s plagued Congress in the last few decades, nominations by a president with a Senate of the same party are almost guaranteed to get through. The closest we’ve come to a rejected nomination was in 2017 with Betsy DeVos for Secretary of Education, who became the first cabinet nominee in history to be confirmed on a vice-president’s tie-breaking vote.

But the withdrawal of Jackson and Puzder shows that some nominees are just too controversial to join the Cabinet,  even one as freewheeling as Trump’s.