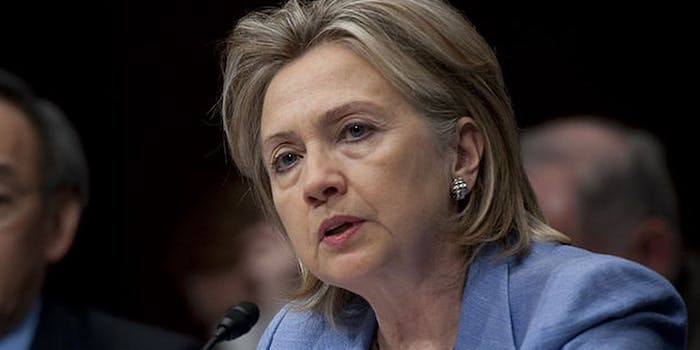 The timing is circumspect.

When Hillary Clinton ran the State Department, she didn’t use email. At least, that was the official story.

However, it turns out that, during her four years as Secretary of State, Clinton used a personal email account—the contents of which were not preserved after she left office—instead of one officially operated by the government. Under the Federal Records Act, all of the emails Clinton sent during her tenure in the Obama administration are technically government records. They are required by law to be both permanently saved and largely accessible to both to government investigators and archivists as well as members of the public.

A further investigation by the Washington Post shows that clintonemail.com, the web domain that hosted the email address Clinton allegedly used, was registered on January 13, 2009—the same day as her Senate confirmation hearing for the position.

The link to the clintonemail.com address came in 2013, when a hacker going by the handle “Guccifer” broke into the email account of longtime Clinton advisor Sidney Blumenthal. Guccifer, who is best known for leaking the paintings of former President George W. Bush and was reportedly arrested in Romania last year, leaked the staffer’s emails to Gawker. That trove contained regular correspondence between Blumenthal and an @clintonemail.com address.

Clinton is far from the first politician to get in trouble for using a personal email address to conduct government business.

As scandal swirled around the Justice Department’s dismissal of seven U.S. Attorneys around the tail end of the George W. Bush administration, Congress requested White House emails that could potentially shed light on whether or not the firings were politically motivated. But these emails were unavailable because many of the administration’s email accounts were hosted on servers privately operated by Republican party groups, which had subsequently been erased.

In 2009, computer technicians were able recover some 22 million Bush-era emails that were thought to have been lost forever.

Clinton’s Republican opponents were quick to jump on her potential flouting of the law. Former Florida Gov. Jeb Bush, who has announced his intention to seek the 2016 GOP presidential nomination, contrasted his decision to release his own private emails with Clinton’s actions.

Transparency matters. Unclassified @HillaryClinton emails should be released. You can see mine, here. https://t.co/wZbtwd8O2j

It should be noted that contained in Bush’s released documents were the names and email addresses (and even some Social Security numbers) of tens of thousands of citizens who sent messages to the governor without any knowledge the their information would someday become publicly available.