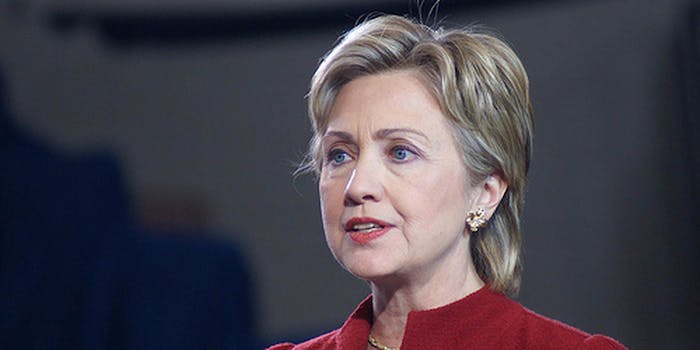 “I felt like I was ten years old again, reading covertly by flashlight under the covers after bedtime.”

Hillary Clinton traveled over 956,000 miles during her tenure as Secretary of State. Each stop in a foreign country—even the friendliest ones—could mean a duel with the local spies over the many secret documents and technologies that she had access to.

Hotel rooms were rarely considered safe, Clinton explains in her newly released book, Hard Choices, so her team took strict security precautions including reading documents “inside an opaque tent in a hotel room.”

When Clinton didn’t have a tent on hand, she and her team improvised by reading sensitive material “with a blanket over our head.”

“I felt like I was ten years old again,” she wrote, “reading covertly by flashlight under the covers after bedtime.”

As silly as it might sound, blankets seem to be a key tool in American operational security.

When Edward Snowden was in a Hong Kong hotel room leaking tens of thousands of National Security Agency documents to Glenn Greenwald and Laura Poitras, the former NSA contractor often covered his laptop with a blank to help ensure that any potential cameras couldn’t glimpse either the secret documents or the passwords he used to access his laptop.

Snowden was becoming “visibly more vigilant about his security” after the first publication of documents, Greenwald wrote in his new book No Place to Hide, and no one was sure who was watching.

Intelligence threats to Clinton were not limited to the hotel. Her State Department has been on the receiving end of what she describes as increasingly sophisticated phishing attacks meant to compromise digital security. By 2012, attackers were impersonating State Department officials.

If Clinton hid under blankets during trips to friendly nations, you can imagine what a trip to a less welcoming place might be like. In Russia, she wrote, most of the State Department team had to leave their BlackBerrys and other devices—“anything that communicated with the outside world”—on their plane, with batteries removed to prevent foreign spies from compromising them.

In Edward Snowden’s recent interview on NBC Nightly News, he claimed that the NSA can “absolutely” turn phones on with the power turned off in order to hack into them.

There was some initial disagreement in the information security community over whether or not this kind of attack is possible—it definitely is—but Clinton’s book makes clear that she’s actively worried about similarly deceptive attacks from foreign hackers looking to access the United States’ most sensitive documents.