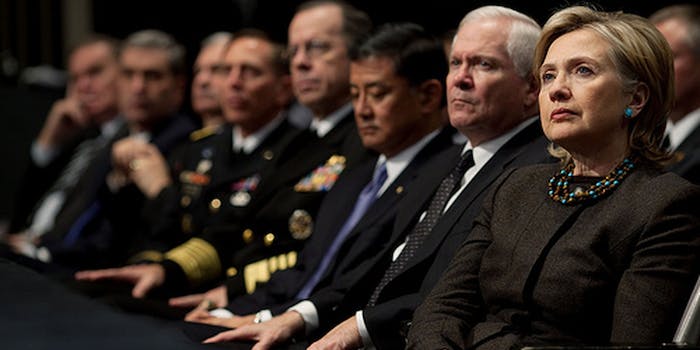 The former U.S senator, Secretary of State, and First Lady took Twitter by storm on Monday when she launched her official account.

Hillary Clinton could become the biggest thing on Facebook. The former U.S senator, Secretary of State, and First Lady took Twitter by storm on Monday when she launched her official account. Within 11 hours, she had nearly 296,000 followers—that’s nearly 27,000 an hour.

The launch of a Twitter account means an official Facebook profile can’t be far behind—especially if she is toying with the idea of running for the White House in 2016. And the numbers taken from Twitter and Facebook fan pages show that Clinton could become one of the most popular politicians on Facebook. Currently, the reigning champion is President Barack Obama, who has more than 35 million fans on Facebook. Obama is light-years ahead of his closest competitor, Mitt Romney, who has 11 million, according to FanPageList.com.

Clinton could catch up quickly if she were to launch a Facebook page. The numbers prove it. The top hit on Facebook when you search Clinton’s name is an automatically generated page that has roughly 517,000 fans. Other top hits include pages titled “Hillary Clinton for President 2016” and “Team Hillary Clinton.” All of these privately run fanpages have thousands of likes each.

But the biggest example of Clinton’s potential power on Facebook, is the page run by the Ready for Hillary Super PAC. According to its website, the group’s social media efforts kicked off this spring and already the PAC has 209,000 likes. The page’s posts often get thousands of likes, shares and comments and that could be only a fraction of potential traffic on a page run by Clinton herself.

One person who may be very supportive of Hillary on Facebook might be her daughter—if only so people can contact the former first lady directly. In January, when Clinton was in the hospital, Chelsea’s Facebook page was flooded with well-wishes for her mom.

But more than a continuation of the “Facebook primary” and “Twitter race” that became so popular between Obama an­d Romney in 2012, Clinton’s social media presence could change the game. BuzzFeed publishe­d a story in May talking about the internet’s love of Hillary Clinton, revealing internal discussions by Clinton staffers in 2008 about letting the then-candidate loose on social media. The idea was that Clinton, by herself, could show how “warm, smart, and funny” she is on platforms like Twitter and Facebook.

“Had social media been around to the degree that it has evolved today, it would have allowed us to have shown a little more of Hillary and we would not have relied as much on traditional media outlets,” said Phil Singer, a top Clinton aide.