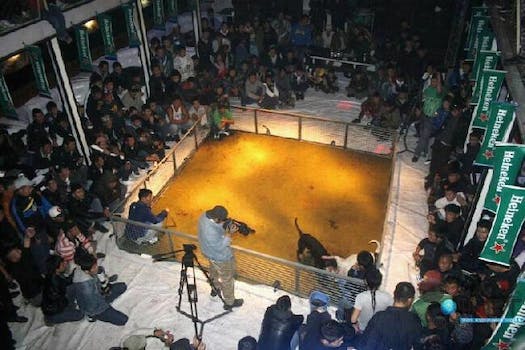 The Dutch brewer's banners have been seen in graphic images of a dog fight since 2010.

When a company faces online outcry from its customers for alleged misconduct, how long should it wait before doing damage control?

For Heineken, the answer is apparently, “we’ll just wait until it goes viral.”

A graphic photo gallery of a violent dogfight—with Heineken banners hanging prominently around the put—has been online since at least October of 2010. The image was written about at least as long ago as July 2011.

However, Heineken only responded Tuesday in response to one of those photos being more and more widely shared online. On its website, the brewer noted the photo doesn’t show an official Heineken event: the banners are “placed upside down,” it said.

The brewer’s verified Twitter account tweeted the same message—“We are aware of disturbing images circulating online. We do not support such cruelty & are urgently investigating”—to over 60 people Tuesday morning.

To be fair, there is no reason to believe anyone affiliated with Heineken was involved in the event. Further, if Heineken had denied it sooner, Heineken may have contributed to its going viral sooner.

A moderator of the page seems to be deleting such posts almost as fast as they come in.