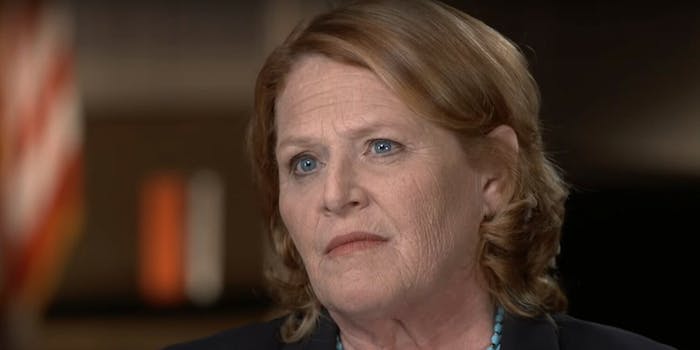 Her opponent called it 'revictimization of victims.'

Sen. Heidi Heitkamp (D-N.D.) apologized on Tuesday after outing some women and misidentifying others as sexual misconduct and domestic abuse victims in a recent campaign ad.

The ad listed the names of the women as an open letter to Heitkamp’s opponent in the race for her seat, Rep. Kevin Cramer (R-N.D.). The ad was intended to criticize Cramer over comments he’d made in support of the nomination of Supreme Court Justice Brett Kavanaugh.

Many of the women in the ad, however, have since claimed that Heitkamp’s campaign used their names without their authorization.

“I deeply regret this mistake and we are in the process of issuing a retraction, personally apologizing to each of the people impacted by this and taking the necessary steps to ensure this never happens again,” Heitkamp said in a statement.

“Sexual assault is a serious crime—and one that too many North Dakota women have experienced,” she continued. “In an attempt to bring awareness to this issue and push back against dismissive comments toward sexual assault survivors by Kevin Cramer, our campaign worked with victim advocates to identify women who would be willing to sign the letter or share their story.”

The Democrat’s apology may not be enough. Several of the women who had been named in the ad without their permission,  including Lexi Zhorela of Bismarck, publicly described their fury.

“I know I’m not the only woman hurt by this,” Zhorela told the Associated Press. “I have only shared my story with a couple of people in confidence. I didn’t want it blasted for the world to see.”

Zhorela was reportedly listed in the ad after a friend tagged her in a post about sexual assault on Facebook. She said that although she had previously planned to vote for Heitkamp in the upcoming midterms, she would no longer support the Democrat.

Cramer seized on the ad, calling it the “revictimization of victims” and described Heitkamp as “desperate.”

“She proved a point that her personal politics matter more than someone’s personal pain,” he said.

“This is another example of Heidi Heitkamp exploiting whoever she can for political gain,” Jake Wilkins, the party’s communications director, told reporters.

Heitkamp’s seat is considered one of the most vulnerable for the Democrats. RealClearPolitics reports that her opponent already leads the polls by 8.7 points.