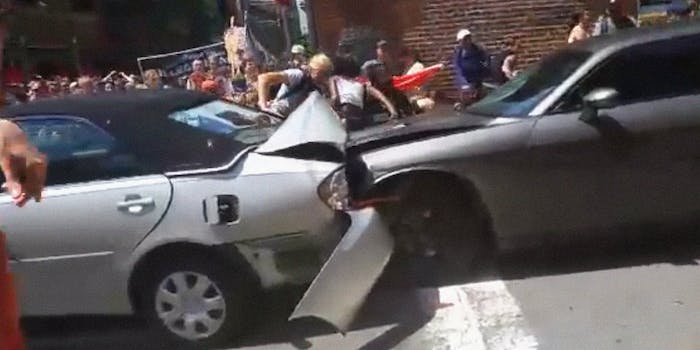 Though the forum hides behind irony, its true intentions are clear.

Redditors are building a case against r/ShitPoliticsSays to illustrate how the subreddit is being used to propagate extremism, listing incidences when users have openly defended or condoned the terrorism of violent white supremacists.

“Far right hate subs ironically whine a lot about because they get called Nazis,” u/SkynetJusticeWarri0r wrote in the introduction to a post on r/AgainstHateSubreddits. “But the curious thing is that these subs are the first in line to defend the actions of avowed and violent white supremacists. It’s a phenomenon that is can only lead us to one conclusion, racism is an [instinctive] part of their far-right politics and reddit like 8[chan] is ground zero.”

Focusing on the online response to the neo-Nazi terrorist incident at the 2017 Unite the Right rally in Charlottesville, Virginia, which killed 32-year-old Heather Heyer, u/SkynetJusticeWarri0r’s recorded dozens of hate-filled comments made by r/ShitPoliticsSays users excusing the attack and mocking the victim.

ShitPoliticsSays sells itself as the home to the “worst political commentary on Reddit,” with its satirical takes and mockery of strictly news-driven subreddit r/Politics. Hiding behind a thin layer of irony is a whole lot of hate.

Some comments shifted the blame for white supremacist James Alex Fields Jr. driving his car into a crowd of leftist protestors by arguing that the demonstration was “blocking traffic.”

Others said that the incident was an accident or “self defense.”

Elsewhere, users sickeningly blamed the murdered victim for her own death.

“Being startled by a car and having a heart attack because of poor lifestyle choices is not murder,” one redditor wrote.

u/SkynetJusticeWarri0r also shared another one of their own posts, on a different subreddit, debunking many of these same far-right talking points which have been propagated online since 2017.

This week, the Daily Dot interviewed moderators from the AHS community, which launched in 2016 to highlight hate and prejudice on the platform. Collecting and cataloging instances of racism, homophobia, and extremism across toxic subreddits has become a way to show Reddit’s inaction in combating these site-wide problems.

The thread profiling r/ShitPoliticsSays is typical of the kind of investigation and refutation that the AHS engages in.

“In the wake of Charlottesville, r/ShitPoliticsSays shows their true colors,” u/SkynetJusticeWarri0r wrote.

“The Unite the Right rally was notorious even at the time due to the fact it was organized, promoted and attended by many far-right extremist groups,” the user continued in another post. “The rally was heavily promoted by the far right, but it was so socially acceptable, that it even ended up on Reddit.”

As the two-year anniversary of the infamous Charlottesville rally, anti-fascist activists on Reddit are still fighting the far-right rhetoric around that day.