This haunted laptop is up for auction on eBay

You can get it for a steal.

Sometimes it’s a thing that goes bump in our closet. Sometimes it’s the cool breeze lurking in the sunshine on a hot summer day. And sometimes it’s a laptop that you accidentally left in a graveyard that convinces you your house might be haunted.

That’s the story for one man anyway, who is trying to sell a “haunted” laptop on eBay. It’s either the most interesting, detailed ploy to get rid of a 2007 Apple MacBook, or the seller believes that his laptop is, in fact, populated with spirits. 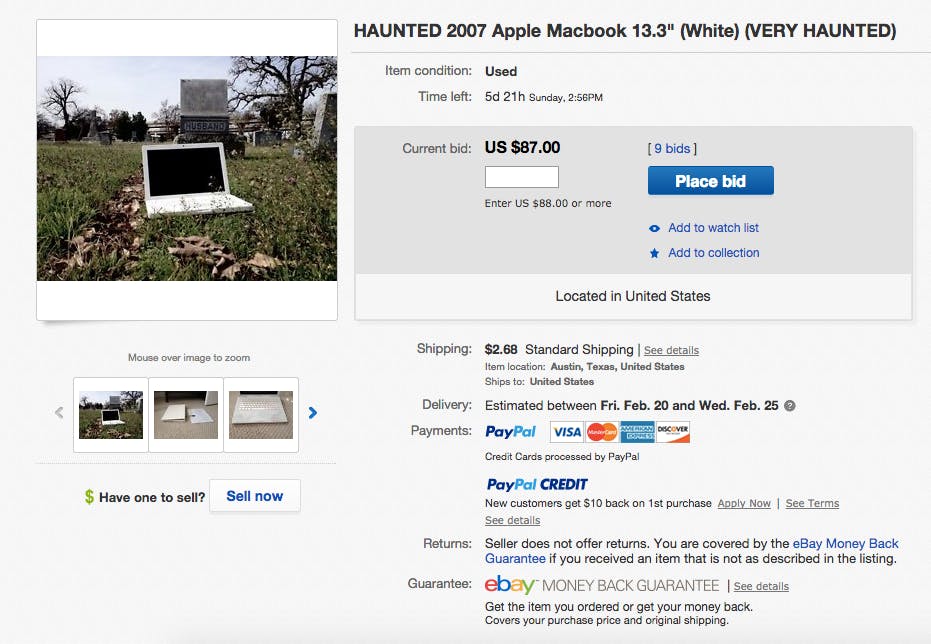 The seller going by wfatzinger on eBay claims that the buyer needn’t worry that the spirits are evil. He says they’re simply tricksters—the seller has seen his computer levitating, opening and shutting on its own, and displaying creepy wallpaper images, among other things.

I noticed that ALL of my songs in iTunes had become scary or haunted. Second, the desktop background was changed to a scary photo. The following week, we (my wife, Barbie, and I) noticed some of our stuff around the house had been mysteriously rearranged. One night, we went out to dinner with my wife’s parents and their friends and some people from my wife’s work and some of their parents. When we came home, my baseball cards were all out of order and my wife’s rare American coins were in total disarray. To make matters spookier, I occasionally saw the computer levitating. In some cases the screen and keyboard would open and shut quickly, as though the computer were attempting to speak.

The seller says that strange happenings on the night he left his computer in a graveyard could have made the laptop haunted. A mysterious green fog appeared in the area along with, apparently, an old woman running through town. “I’m NOT a computer expert, so I’m not sure which of these anomalous entities might have precipitated the haunting, but I thought it best to include all here,” he writes.

This isn’t the first time reports of haunted technology have popped up online—there’s been stories about haunted cell phones calling and texting strange messages that unnerve the recipient. And a terrifying story of a Reddit user being haunted by his dead girlfriend’s Facebook messages gave the Internet nightmares for weeks.

But wfatzinger’s laptop might be the first one that’s both haunted and up for auction. And if it is in fact just an advertisement aiming to profit off paranormal activity, then it’s quite convincing.