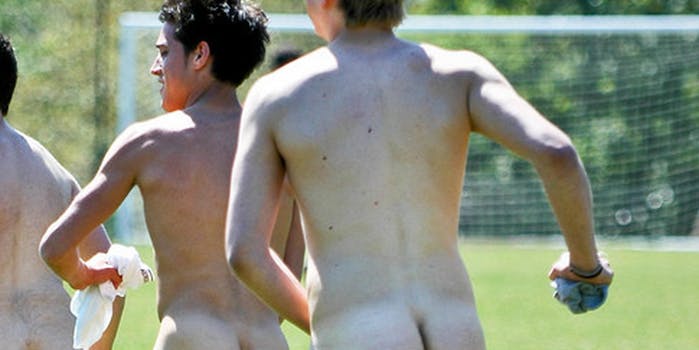 A group of students on the Harvard University campus attempting to join national protests over police brutality clashed with another group of gathered for a very different reason.

The protest happened Thursday evening at the Harvard Yard, which also happened to be the location of a traditional, pre-finals streaking event called the Primal Scream.

According to Harvard student newspaper, The Crimson, the collision of the two events turned ugly when students protesting the deaths of Michael Brown and Eric Garner at the hands of police called for four and a half minutes of silence. The 30 protesters tried to quiet the much larger crowd of naked runners with a plea shouted into a megaphone. When that didn’t work, they started chanting “Silence! Silence!”

The students gathered for naked frivolity returned the chant with one of their own, shouting “U.S.A.! U.S.A.!”

“For people to say black lives matter, and for the crowd to shout back ‘U.S.A.,’ which is upholding a system that is oppressing black people, I think that that is problematic,” student Amanda D. Bradley told The Crimson.

While many of the protesters felt insulted by lack of respect given to their demonstration, The Crimson found that many students participating in the run didn’t know what the protest was about or didn’t even realize it was even happening in the chaos of the naked gathering.

“I’m sad because it…look[ed] like there was one group who was for [the demonstration] and a huge group that wasn’t, and I don’t think that was the case,” runner Skip L. Rosamilia said.

Students and community members gathered for a much larger march on Friday in protest of the police killings.