We are well into our first week of December, and that means that the Internet is collectively racing to create cute holiday-themed applications for us.

With Christmas Day only a few weeks away, the battle of the best countdown app is underway. And this isn’t a competition just for indies devs; big names in tech like Microsoft and Google, are throwing their weight around as well. All in the name of bringing us a superior Santa Tracker.

But which Santa Tracker is right for you? We’ve culled the Web and respective App Stores to find them all and bring you the definitive guide to Santa Trackers.

If Santa tracking were a legitimate industry, the North American Aerospace Defense Command (NORAD) would be its pioneer, having the kooky tradition in place for over 50 years. The app’s latest iteration was produced in partnership with Microsoft, which means you get to track St. Nicholas using Bing Maps.

The app and website feature an interactive countdown to Santa’s arrival. You can watch videos, listen to music, play games in Santa’s Village and read about Santa as well as Norad’s history in Santa-stalking.

Forget about tracking Santa for a second, though—the game Thin Ice on the mobile app is seriously addicting. I just lost 20 minutes of my life.

But it looks like there’s only one game available on the mobile app, which contradicts the website’s one-game-unlocked-daily model. In fact, if you browse through the rest of the site and app, it doesn’t feel as cohesive as one would like. Also, the Santa Tracker website is peddling the use of Internet Explorer. Egh.

Rank: Hour four of the A Christmas Story marathon.

Norad originally had a partnership with Google, but after they parted ways, the search engine giant went ahead and developed its own Santa tracker.

The app and site also has a moving countdown as well as games and videos that are set to unlock on a daily basis. They also have a fully-interactive view of Santa’s Village, which is undeniably cute. And in case that isn’t enough, it also has simple programming lessons for kids and a nifty Chrome extension. With Google’s incredibly beefed up desktop application, you definitely won’t be left wanting more activities while you wait for Santa to get on his sled.

However, according to this Google Earth blog post, when it comes down for the actual Santa tracking to commence (usually on Christmas Eve), Norad is actually a bit quicker in producing Santa’s location (the latter reportedly has radar stations near the North Pole). The company makes up for it with beautiful design and better interactivity though, so maybe keep using Google’s tracker for now and then switch to Norad’s on the 24th.

Rank: Carolers who overstay their welcome.

Where is Santa? Lite (iOS, Android)

This app is all business. It immediately shows you a Google Maps map and a place to tap the radar to find out the answer to the app’s name. Upon tapping, a green radar light will begin “scanning” the map and instantly show you, well, where he is in the world. 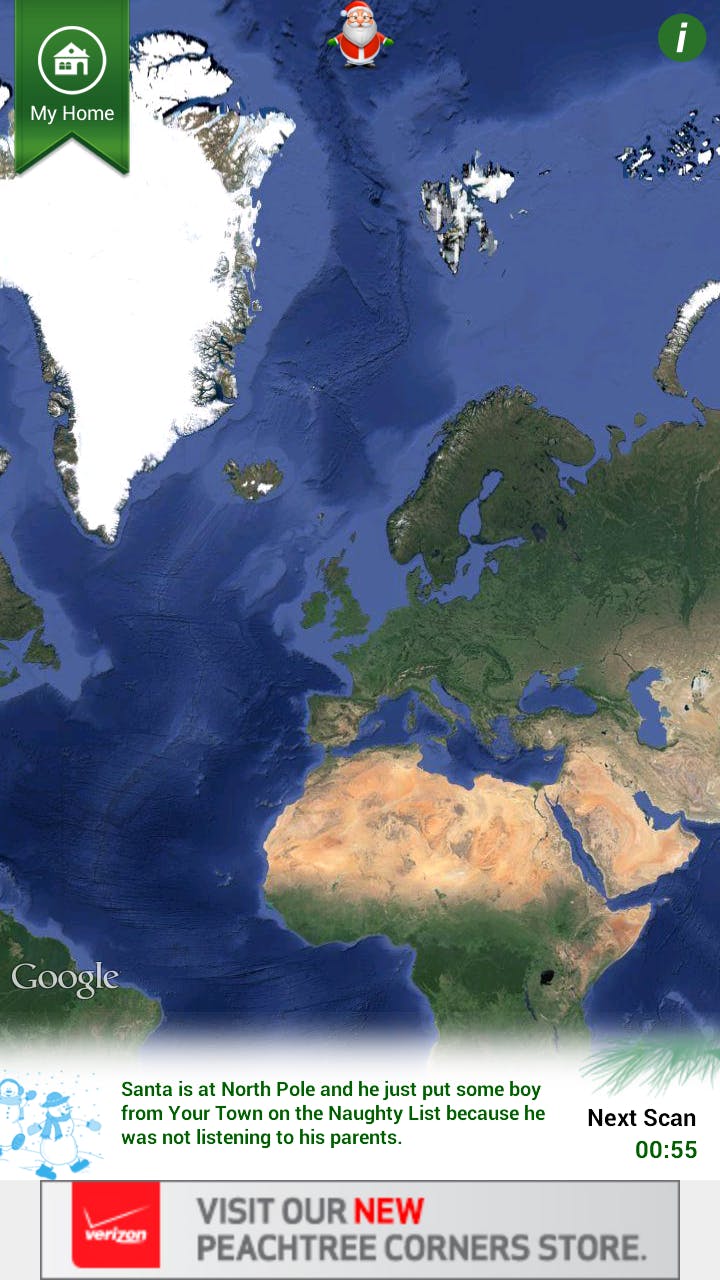 Where is Santa? Lite

You can “track” Santa as many times as you want in one-minute intervals, and each time you get a different response. Here’s a sample:

Santa is at the North Pole and he just put some boy from Your Town on the Naughty List because he was not listening to his parents.

Definitely a parental teaching tool worth checking out. Additionally, it pinpoints your location on the map and yields Santa’s ETA, to give you time to set out milk and a plate of cookies by the chimney. Whether or not it is an actual tracking app that employs satellite technology to pinpoint St. Nick’s location remains to be seen. Also, after about 10 radar refreshes, you’d probably get bored. 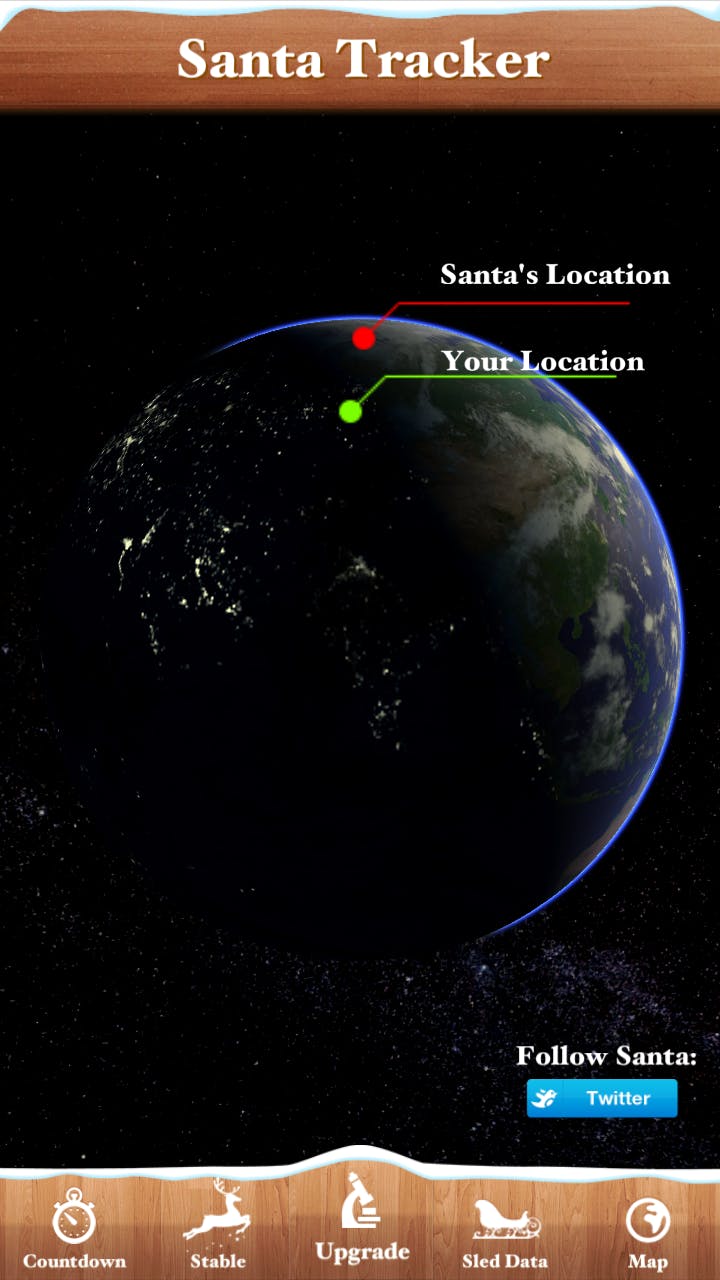 Another straightforward option. It shows both you and Santa, as located on a 3D globe that can be moved around with your finger. It also has a countdown page, for both Christmas Eve and Santa’s Sleigh Launch (which is six hours earlier).

You can send Santa on a test flight with a sleigh speed of your choosing. In return, you get quirky sleigh data based on the test, such as presents delivered, current speed, last location, destination, and mince pies eaten.

Of course where there’s a lite version there’s a pay-for version, which means in order to get more of the promised features, you have to pay up.

This website is the ultimate Santa update destination; it partners with SantaUpdate.com, Kringle Radio and My Merry Christmas.com, the world’s largest Christmas community. It features a map of the world with various locations pinpointed with a gift icon or a bouncing sleigh, marking relevant news about Mr. Claus. It isn’t as flashy as Google or NORAD’s sites, but what it lacks in style it makes up in function.

You can use the site to get a hold of Santa via email or set up your phone to receive regular text message updates on Santa’s whereabouts, for free! Text updates begin very early on Christmas Eve.

Photo via Bart Fields/Flickr (CC BY 2.0)