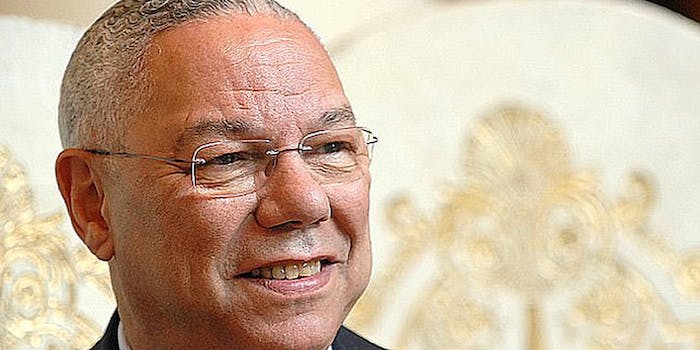 In spite of email correspondence leaked by Guccifer, Powell denies having an extramarital dalliance with a diplomat.

Guccifer, the notorious political hacker whose targets have included officials in the Clinton, Bush and Obama administrations, apparently has it in for former Secretary of State and retired U.S. Army General Colin Powell.

Guccifer broke into Powell’s email account via an AOL exploit back in March, and the hacker refuses to go away. The hack is now causing additional repercussions for the general, forcing him to issue a denial of an extramarital affair.

Guccifer posted a link to some correspondence between Powell, who has been married for half a century, and Corina Cretu, a Romanian diplomat, on Powell’s Facebook page, according to The Smoking Gun website. TSG is one of the standard recipients of proofs of the hacker’s frequent shenanigans.

The link was posted via the hacked account of another general and has since been removed from Powell’s page, though it remains on the other general’s page with the comment “Traitor to the mother land!” (And was liked six times!)

Guccifer followed that up with another link to additional correspondence, some apparently from Cretu’s newly hacked Yahoo email account.

Powell had gotten to know the diplomat Cretu, who also served as a member of the European Parliament, during his time as Secretary of State, and stayed in touch with her for some years after leaving government in 2005.

In the emails received by TSG, the magazine states that “Cretu calls (Powell) the love of her life and describes a relationship that spanned more than a decade. The 2010-2011 e-mails would leave most readers with the clear impression that the forlorn Cretu is writing about the twilight of a lengthy romance.”

The questions directed to Powell by a TSG reporter, the publication insisted, “did not mention Cretu … by name or refer to a possible romance.”

However, Powell’s quick response, in the form of a statement, does mention his alleged lover’s name. Powell says the emails the two exchanged “over time… became of a very personal nature, but did not result in an affair. Those types of emails ended a few years ago. There was no affair then and there is not one now.”

She sent him, the general said, plenty of emails and photos, including bathing suit photos, but “never anything improper.”