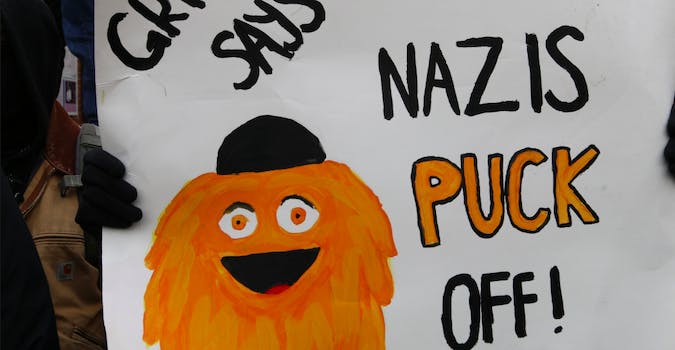 Is Gritty good for the left?

Last weekend’s alt-right rally in Philadelphia ended as most fascist rallies thankfully do in America in 2018. Members of the alt-right were vastly outnumbered by antifa, and the event ended without the loss of life that marked Charlottesville

Perhaps because there wasn’t much to report from the rally, the discourse around the event on Twitter quickly turned to a familiar place for online leftists: Gritty.

Gritty, a delightfully crazy looking monster, was introduced to an adoring public as the new Philadelphia Flyers mascot in September and, by October, the left-wing internet had fallen so deeply in love with it that several outlets gleefully declared “Gritty is antifa now.”

Gritty’s destiny as a member of the real #resistance was mostly a happy accident. It just so happened that the Flyers rolled Gritty out a week before President Donald Trump paid a visit to Philadelphia. Just like the rest of America, Philly antifascists were really into Gritty at that time, and decided to plaster his beautiful countenance on their protest banners.

Yes, the name Gritty and the city of Philadelphia have a proletarian vibe, but for the most part we have to admit that Gritty was as the right place at the right time (or rather, left place at the left time), and the rest is meme history.

Gritty is a worker

For obvious reasons, Philly antifa and their allies embrace Gritty even more vigorously than groups outside of the City of Brotherly Love. And so, last weekend, Gritty was everywhere.

As with everything on the internet, Gritty’s extreme exposure has led to the lovable monster gaining some haters. Some on the left have begun to wonder if Gritty is actually good after all.

Movements have logos and symbols. Prior to Gritty’s birth, antifa (anti-fascism) had two common symbols: the black flag; and three black arrows pointing down and to the left with a black circle around it.

Antifa first came into the public consciousness during Donald Trump’s inauguration, though anti-fascistism is a longstanding global movement as old as fascism itself. Anyone who consumes much news at all can now identify the young black-clad protestors wearing black bandanas over their faces who show up at conservative events and protest authoritarian politics as ANTIFA.

However, the obvious counterpoint to this is that a more inviting logo would, well, invite more people. Gritty could serve as a kind of sign of antifa solidarity for people that don’t want to cover their faces in black bandanas and risk being targetted by police officers. This was clearly true over the weekend, as many protestors who are sympathetic withantifa, but not participating in black bloc activity (organized groups of black-clad protestors with faces covered), brought Gritty signs or even dressed as Gritty.

It’s possible that some protestors even showed up because of antifa’s association with Gritty. Its hard to argue that Gritty didn’t help put more bodies in the streets.

Broadly speaking, humor has often been a reliable tactic for fighting fascism through history. Clowning has been used effectively to defang fascist demonstrations across the globe and a few years ago, a tuba player who showed up to mock white supremacist protestors went viral. Gritty is the next in a long line of antifascist comedic and artistic tactics.

Opponents of Gritty would argue that opposing fascism through comedy and light-heartedness has obvious limitations. The example of Nazi Germany immediately comes to mind, and there are present-day authoritarian movements that have gained enough traction to supresses satire in Russia, the Philippines, and Turkey among other places.

One of modern literature’s greatest satirists, Kurt Vonnegut is often quoeted on this issue. He famously said:

“During the Vietnam War, every respectable artist in this country was against the war. It was like a laser beam. We were all aimed in the same direction. The power of this weapon turns out to be that of a custard pie dropped from a stepladder six feet high.”

In addition to the assertion that Gritty isn’t an effective symbol of antifa, there is a feeling that he may even be a misleading symbol. There is a sense that Gritty doesn’t adequately express the goals of antifa in the way that the symbol of bread and roses speaks directly to the aims of the socialist movement. Not only is there a fear that embracing Gritty indicates a lack of seriousness, but that Gritty misrepresents what anti-fascism is about.

In comparing Gritty to Pepe, leftists are nodding to the idea that like just as apolitical people are drawn to Pepe (the animated frog that has become a symbol of the alt-right), people may be drawn to Gritty without fully understanding what it means to oppose fascism. Gritty is the mascot of a large corporation after all. Because fascism is a malicious ideology, this sort of trickery is par for the course for aspiring authoritarians. But, socialism and anarchism, they might argue, are worth presenting on their own merits, not hidden behind a warm, fuzzy veneer.

But… Gritty is good

In the current moment, however, fascism in America is not at the point where the majority of the population agrees it is time for violent resistance.

Explicit fascists are generally not in power, even if the president has fascist tendencies and aspiring fascist advisors like Stephen Miller. If fascism marches in the streets and speaks in the public square unopposed, however, creeping authoritarianism could spread. Already, the Trump administration has certainly made white nationalists more comfortable presenting their views in public. The battle over to what extent fascism will rise is still being fought in the streets and in the minds of young people.

Vonnegut was speaking about opposing the entrenched and relatively absolute power of Nixonian Republicans. While humor may not stop a Donald Trump executive order, it could dissuade impressionable minds from falling in with fascists and marching alongside the Proud Boys. It could sway a teenage boy watching YouTube away from alt-right channels. Vonnegut argued that satire has no impact on the halls of power. The does not mean that humor and fun have no power in the streets.

As antifa and the alt-right are still relatively nascent movements in American life, the war between the far-left and the far-right is still largely one of public opinion. Each small clash between the two groups, either in the streets or online, draws the attention of the mainstream media. As such, antifa is constantly in the middle of a PR campaign, and in modern wars of public opinion memes can be useful.

With Fox News and Republican politicians trying to demonize the left, and the alt-right making bids for dapper respectability, it may not be a bad thing to inject some levity and broad appeal into the antifascist movement.  The coverage from Philadelphia bears this out. Writing for Vice, Tess Owens compared the austere anger of the Proud Boys to the “carnivalesque” exuberance of the anti-fascists. She writes:

“Over on the protest side, which was bolstered by about a hundred members of the Democratic Socialists of America, the atmosphere was more carnivalesque. Aside from those wearing the colors of Gritty, the Philadelphia Flyers mascot, someone played a tuba, and one group of protesters weaved around the crowd inside a Chinese dragon that was made to look like the popular meme Grumpy Cat.”

If you weren’t politically involved and had to pick a side purely based on that description, which would you choose? Shouldn’t opposing fascism sound like something people enjoy?