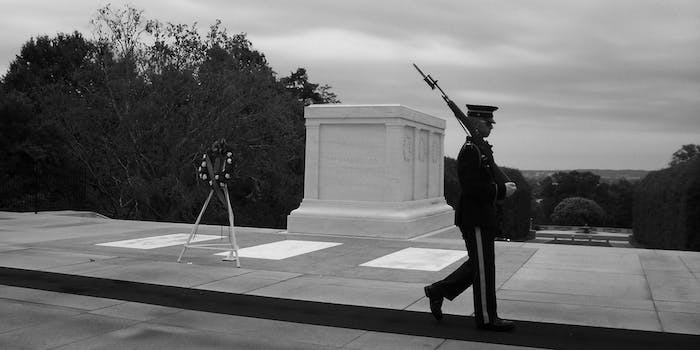 The stories of heroism cropping up around this campaign are inspiring.

Iraq and Afghanistan Veterans of America, an advocacy nonprofit for veterans of the post-9/11 wars, has launched its fourth-annual #GoSilent campaign. The organization suggests that Americans everywhere observe a minute of silence at 12:01pm ET on Memorial Day in honor of fallen war heroes.

Honor those who paid the ultimate sacrifice, take a moment to #GoSilent at 12:01 @cspanwj

The #GoSilent campaign, however, is quickly becoming its highest-profile endeavor to date. On Monday, the hashtag crossed over to from Twitter to Facebook and became a trending item.

Remember them. Honor them. Celebrate their lives and memory. #GoSilent with us at 12:01 ET #MemorialDay pic.twitter.com/hLk0cbaI1O

Many #GoSilent tweets have a similar structure: a personal photo or narrative woven into the broader remembrance movement.

#GoSilent And when our work is done,
Our course on earth is run,
May it be said, 'Well Done;
Be Thou At Peace.' https://t.co/mn2sVnrW3k

I will #GoSilent for PFC Steven Miller & all the other soldiers lost to suicide before their time. @iava #MemorialDay pic.twitter.com/csZtlB3pvL

I will #GoSilent tomorrow in memory of my friend Ryan Doltz and my VMI roommate Mike Newton. RIP guys. pic.twitter.com/Rq9Cns53IJ

I will #GoSilent for Maj. Megan McClung KIA Dec. 6, 2006. "Be bold. Be brief. Be gone." Rest in Paradise, Ma'am pic.twitter.com/vZUIhHCqTI

Likewise, there are no shortage of political, celebrity, and corporate tie-ins to the #GoSilent campaign.

I took the #GoSilent pledge. Join me in honoring our nation's fallen this Memorial Day http://t.co/hQ3H3ZjC6c

#GoSilent for 1 minute today and remember them. Before a Soldier’s Rest, a Panoply of Details http://t.co/mavGmhnYzl @iava @PaulRieckhoff 🇺🇸

Honor the Fallen today and take the pledge to #GoSilent at 12:01 ET. #MemorialDay @iava

Take the @IAVA #GoSilent pledge and help us honor our nation's fallen on #MemorialDay: http://t.co/TV5Tn4QofF.