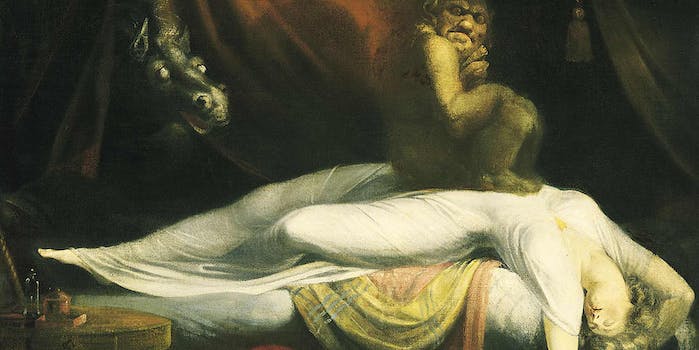 Our elected representatives, they’re just regular people like you and me, in that some of them believe ridiculous things. Take Gordon Klingenschmitt, for example.

Klingenschmitt is a Republican elected to Colorado’s House of Representatives in last week’s midterms, which saw the GOP crushing an embattled Democratic Party at nearly every level of government. Klingenschmitt’s district, which includes the city of Colorado Springs, is a stronghold of conservatism in an increasingly purple state. Klingenschmitt bested his opponent, Democrat Lois Fornander, by nearly 40 points.

The book is called The Demons of Barack H. Obama: How the Gift of Discerning of Spirits Reveals Unseen Forces Influencing American Politics, and you can buy it on Amazon for $2.99. It was published in August 2012, only a few months before Obama won reelection over former Mass. Governor Mitt Romney.

The Demons of Barack H. Obama is a non-fiction book explaining a practical, Biblical, Christian theology concerning the spiritual gift of discerning of spirits, which is generally described in the Bible as the supernatural ability God gives to some people to see otherwise invisible non-human spirits including the Holy Spirit of God, angels, and demons.

…
By objectively observing the moral fruit, character, and manifestations of human actors, we can see how God (or the devil) uses people to build their moral (or immoral) kingdoms in our midst, particularly in the field of American politics. By associating spiritual discernment with human ethics, we can see with our spiritual eyes the otherwise invisible Spirit of God manifesting in politicians whose policies and laws promote moral holiness, truth, and love for God and neighbor, to build a godly nation. However, by objectively observing how a politician’s policies and laws may ultimately promote sin and immorality among the people, we can discern that politician actually manifesting demons, to destroy a nation.

This book examines the policies and actions of Barack H. Obama, to compare the moral indicators of his political behavior to Biblical standards of ethical morality, to help us discern what spirits are actually manifesting inside the soul of the 44th President of the United States.

The president isn’t the only person Klingenschmitt insists is possessed by demons. According to Right Wing Watch, Klingenschmitt, a former Navy chaplain, gave an interview in 2011 about how he once conducted an exorcism on a young woman that “cured” her of being a lesbian.

To many outside observers, these beliefs may seem more than a little out there. However, a 2012 Public Policy Polling survey found that 57 percent of Americans believe it’s “possible for people to become possessed by demons.”

Even so, there have been efforts by the state’s GOP leadership to put some distance between themselves and Klingenschmitt’s beleifs. “Gordon does not speak on behalf of the Republican Party,” Colorado Republican Party chairman Ryan Call told the Denver Post earlier this year. “To suggest otherwise is inaccurate and dishonest.”

So, if you want a barometer for how poorly the Democrats fared in last week’s midterm elections, the people of Colorado Springs overwhelmingly rejected their candidate in favor of someone who thinks the president of United States is possessed by demons, who even officials in his own party think is crazy.

It looks like the Dems have a lot of work to do between now and 2016.