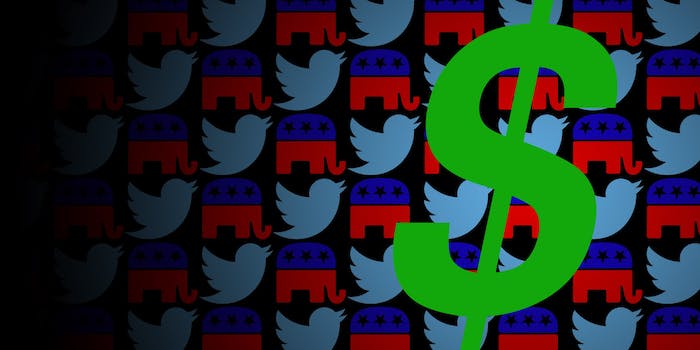 The tangle of U.S. campaign finance laws just added another knot thanks to Twitter.

In 2010, the Supreme Court’s Citizen United ruling opened the floodgates to effectively limitless campaign spending in the form of Super PACs: Politically-aligned lobbying organisations that are free to campaign for candidates and parties, constrained only by regulation against overt “coordination” between themselves and official campaigns.

But even those bare minimum rules are being allegedly compromised by the GOP, CNN reports—with Republican groups covertly sharing internal polling data via Twitter.

For example, a Super PAC could carry out an expensive poll indicating that a certain seat is winnable if sufficient resources are used. Unable to “coordinate” with the official campaign, it instead posts the polling data onto the Twitter account, where they can access it.

American Crossroads, American Action Network, and the National Republican Congressional Committee are among the groups with access to the data, a source told CNN. While all three refused to provide comment for the story, the offending Twitter accounts were deleted within minutes of CNN reaching out for comment.

The legality of the practice is unclear: “It might not be legal,” a spokesperson for the Campaign legal Center said. “It’s a cutting-edge practice, to my knowledge, the Federal Election Commission has never before addressed to explicitly determine its legality or permissibility.”

The accounts themselves acknowledged this legal murkiness: One was named after character Bruno Gillianelli from The West Wing, “who pressed his colleagues to use ethically questionable ‘soft money’ to fund his campaigns.

The accounts investigated only had messages as far back as July 2014, and all pertained to the 2014 Midterms—but CNN’s source says that the practice has been ongoing for years, and messages are periodically purged.