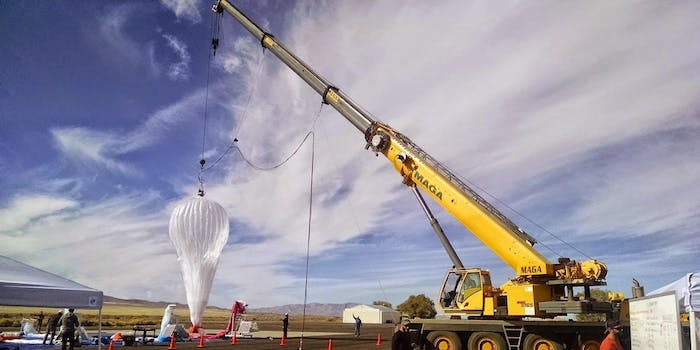 Google’s Project Loon gets closer to taking off

In the grand scheme of totally insane ideas from major tech companies right now, Google’s Project Loon actually falls somewhere in the middle. While Facebook is working on low altitude spaceplanes to deliver Internet to the unconnected masses, Google X’s Project Loon aims to create a “balloon-powered Internet” network, hovering right at the cusp of space, to cover the remote and rural areas that aren’t yet online. In an update on its moonshot undertaking, Google reveals that Project Loon has come quite far in just a year—especially for something so far out.

Project Loon is tweaking its predictive formulas to help situate these custom weather balloons in the right spot. Thanks to improved understanding of weather conditions and stratospheric winds, one balloon wound up within 1.5 kilometers of its target location after a 9,000 kilometer test flight.

The project is also focused on scaling up—blowing up massive, high-tech balloons takes a lot of time, after all: “It’s one thing for our balloons to last longer, but to build a ring of connectivity around the world we’ll also need to get more in the air.”

Thanks to new custom equipment, balloons with a volume comparable to 7,000 ordinary party balloons can now be filled in fewer than five minutes, making it possible to launch as many as 20 each day. Some of Project Loon’s other lessons have been a product of trial and error:

… We’ve learned a great deal about what it will take to bring the Internet to everyone, no matter where they are. For example, what footwear is it best for our manufacturing team to wear when they need to walk on the balloon envelopes? Turns out it’s very fluffy socks, the fluffier the better, to ensure the least amount of friction when building our balloons. This is just one of the hundreds of discoveries that has helped prevent leaks and refine our automated manufacturing process so that our balloons now last 10 times longer in the stratosphere than they did in 2013, with many lasting 100 days or more (our current record is 130 days!).”

Project Loon sounds crazy, but like every other initiative out of Google’s mad scientist lab, it’s meant to be a moonshot, not the slow, iterative progress we’ve come to expect in technological advances. It’s early in the race to connect the unconnected world, but our money is on Project Loon’s theoretical ring of smart balloons; something about Facebook’s concept of huge unmanned aerial vehicles is just, uh, too scary.