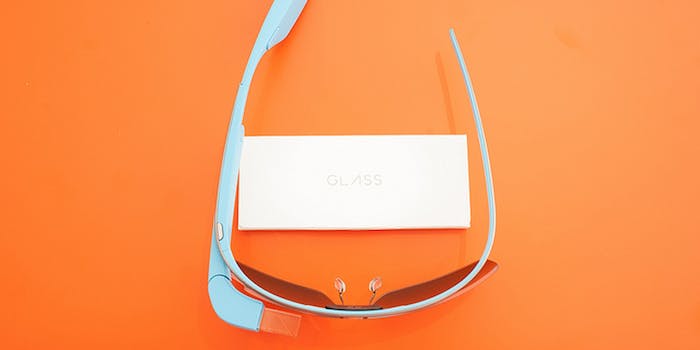 How to protect your Wi-Fi from Glassholes

To disturb and detect.

Google Glass wearers have been the focus of violence and derision and, in turn, many of them haven’t made things easy for their cause. If you’re not fond of having virtual eyes on you, there’s now a way to stop the Glasshead invasion.

Berlin-based artist Julian Oliver has created a program, glasshole.sh, that blocks any Google Glass wearer’s Wi-Fi signal. He’s part of a privacy group called Stop the Cyborgs, and was compelled to create the script after reading a “productive and open-chested rant” by Omer Shapira, who wrote about the appearance of Google Glass at NYU’s Interactive Telecommunications Program gallery show, and the wearer’s question about how to monetize a piece of art:

“[I]f you’re recording the conversation without asking for permission — you’re just an asshole. That shouldn’t surprise you if you’ve had Google Glass on your head in any other social situation, but now you’re literally suspect of trying to steal an idea. Kindly and promptly remove yourself.”

Idea theft is a complex issue within the Glass debate, but Oliver’s premise is fairly simple: The script, which can be run on Raspberry Pi, will detect any Google Glass users attempting to access the owner’s local network, and kick them off. Additionally, it may beep to alert non-Glass wearers to a Glasshole in their midst. It’s similar to a cellphone jammer.

Oliver’s not the first person to attempt to shatter the Glass ceiling, and this program is still in the experimental stage, but he told Wired he might be going even further with glasshole.sh, and attempting to create a version that could kick a user off any network, not just one local network:

“That moves it from a territorial statement to ‘you can all go to hell.’ It’s a very different position, politically.”

Image via Giuseppe Costantino/Flickr (CC BY 2.0)