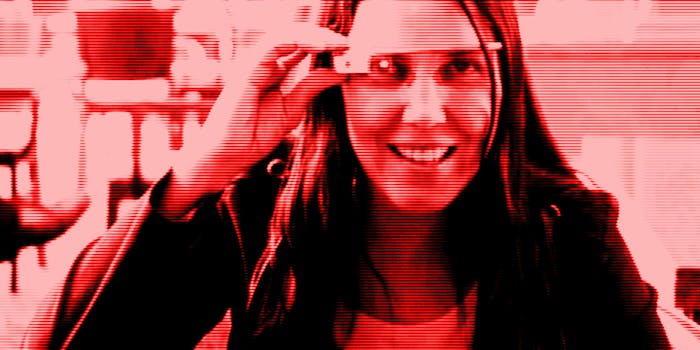 This Google Glass user really doesn't want to take them off.

US Airways came under some pretty heavy criticism lately after responding to a customer’s enquiry on twitter with a graphic photo of a woman and a model airplane engaged in an act that does not bear repeating.

But now it’s United Airlines that has come under fire, with one of its policies branded “reptilian”.

No, the accuser is not one of Alex Jones’ followers: it was Cecelia Abadie who laid the charge, a self-described “geek” and “transhumanist” who is better known for being a notorious “Glasshole” who narrowly avoided a ticketing for driving whilst wearing Google Glass.

The cause of her outrage? The airline decided that because of “security” concerns and in the interests of customer privacy, they would rather passengers did not wear head-mounted cameras in the cabin, and asked her to remove her Google Glass device.

The flight attendant was “a really nice person trying to do her job”, Abadie acknowledges, and argues on her Google+ page that the “reptilian response at its best” is largely down to a question of “education and perception” of Google Glass.

Or perhaps it’s that other passengers don’t want to have to deal with the possibility of being secretly recorded at any time, by a technology that has been hacked to allow for video streaming even without the knowledge of the wearer. United Airlines policy on recording devices follows this, stipulating they should only be used for capturing “personal events.”

In a move that was sure to enamour her to her fellow passengers, she then snapped shots of the inside of the cabin with her cellphone, thus proving that Google Glass isn’t necessary to invade the privacy of others—but it certainly helps.

Abadie previously ran into trouble with the law when she was ticketed for wearing Google Glass whilst driving. However, it was impossible to prove whether or not the device was on, and so the charges were dismissed.

Abedia has been flippant about criticisms of Google Glass, telling detractors to “get over it” and claiming that “unless you’re doing something really good or something really bad nobody cares to record you with any cam”.

The only problem is, the phenomenon of creepshots proves that this just isn’t true. And Google Glass now promises to make them easier than ever.