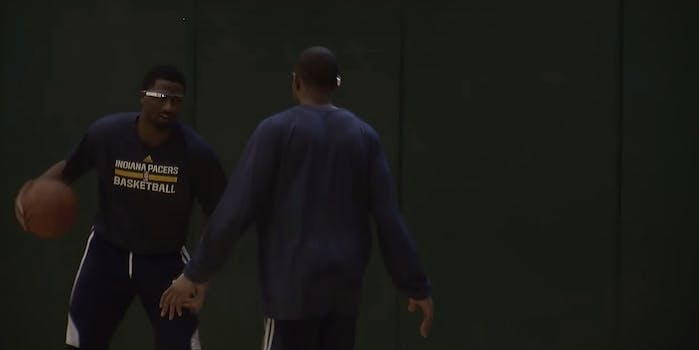 Google Glass will give you a courtside view of the NBA

Those sitting in the front row will be able to stream the game onto the scoreboard.

Although most people have responded to Google Glass with skepticism, if not outright derision, two very different groups have already embraced the controversial device with open arms: the medical community, and the NBA.

The latter party has been particularly quick to jump on the Google Glass bandwagon, with the Sacramento Kings announcing that the team’s players would wear Glass during a game last January. Now, the Pacers have also leapt on board, giving Glass to celebrity attendees so they can stream the game courtside.

According to the Verge, the team wants to use Glass to beam the action on the court onto the scoreboard, so the fans in the cheap seats can also get a courtside view. The first celeb to don the headset is NFL defensive end Robert Mathis, who’s played for the Indianapolis Colts since 2003. While he’s watching the game, he’ll receive texts giving him directions and alerting him to when the stream goes live. (The team has also tried out the device during practice, though regulations prohibit them from wearing Glass during games).

In theory, this sounds like a really great idea. By giving courtside attendees the ability to stream during the game, the Pacers is essentially giving every fan front-row access to the action, so they can see every dunk and every bead of sweat on Roy Hibbert’s scalp, regardless of where they’re sitting. In that sense, the Pacers are using Glass as a tool of democratization, so everyone can essentially have the same experience of watching the game.

At the same time, though, giving celebrities with courtside seats access to Glass sort of reinforces the idea that Google Glass is not meant for everyone, just for those who enjoy a very specific (and very high) status level. It plays into the idea that Glass, and tech in general, is reserved solely for the hoi polloi, and not plebes like us—which sorta runs contrary to what it seems like Google was trying to do by making the device available to everyone, regardless of their “Explorer” status, earlier this week.

It remains to be seen whether Google Glass will achieve any success in the mainstream commercial marketplace (though given its allegedly grossly inflated $1,500 pricetag, I’d say it’s doubtful). But for now, aspiring Explorers with shallow pockets can content themselves with watching Roy Hibbert and Robert Mathis wear Google Glass for us.