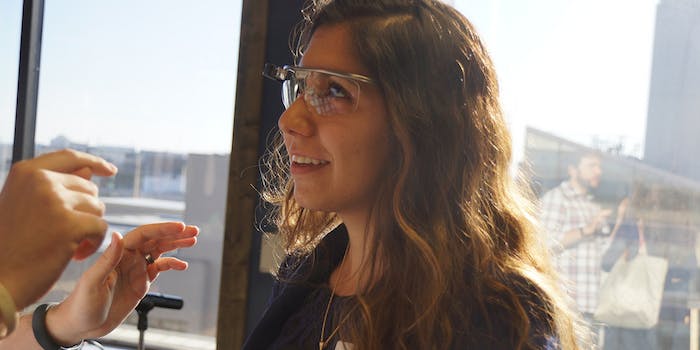 Google Glass might cause headaches, ‘discomfort’ in your eye muscles

Is Google's most polarizing product also a potential health concern?

There are many valid criticisms one can level at Google Glass: that the design is clunky and unsexy, that it breaches other people’s privacy, that it’s exclusively for out-of-touch, elitist techies who’d rather play with their $1,500 spaceman glasses than actually interact with the outside world.

But one critique we haven’t heard is that wearing Google Glass can be potentially hazardous to your health. Glass wearers are reporting experiencing splitting headaches after trying out the device, as well as extremely uncomfortable-sounding “eyeball pain.”

Although users have been complaining about Glass causing headaches for a while now, two Betabeat reporters who tried the device at Google HQ decided to ask Google about it after experiencing similar effects while trying the device. So Google directed them to Dr. Eli Peli, a Harvard opthamologist who consulted Google during Glass’s development.

According to Dr. Peli, there’s a simple reason for why Glass causes headaches. (Although he’s hesitant to call them headaches, referring to them instead as “discomfort in the eye muscles.”) It’s because the Glass display is based in the upper right-hand corner of our eyes, to avoid obstructing the wearer’s field of vision. Because we rarely look out of that corner of our eye for extended periods of time, Dr. Peli says Google Glass users can often experience headaches—OK, “discomfort in the eye muscles”—after doing so.

“You’re on one leg [or the other] as you walk, but try to stand on one leg for a long time and you’ll feel tension, because you’re not using it how it’s normally used,” Dr. Peli told Betabeat. “If you’re looking at the Glass for a minute, you’re holding it there for 60 times longer than normal.”

The solution, says Dr. Peli, is to avoid the inclination to fiddle around with Glass for extended periods of time when you first get the device. Instead limit your usage to activities that only take a minute or two at a time, such as checking your e-mail or snapping a photo. (Translation: Don’t use Glass to binge-watch Ken Burns documentaries). If you follow Google’s recommendations for using the device, your eyes will get used to looking in the new direction, and the discomfort will go away in a few days or so.

It’s unclear if Google is planning on doing anything to address these complaints.