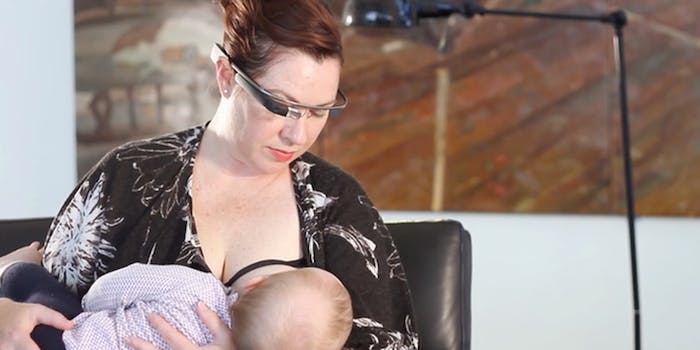 In Australia, new moms get tips on breastfeeding through Google Glass

Not everyone's a Glasshole.

There have been a lot of “don’t’s” in relation to Google Glass lately. So what is it good for? Apparently, breastfeeding.

The Australian Breastfeeding Association’s Breastfeeding Support Project is utilizing Google Glass in a constructive, educational way, partnering with the Melbourne company Small World Social to create a hands-free instructional guide for mothers. According to the project’s website:

“A specially trained counsellor will guide the mother through the breastfeeding process, addressing any specific concerns and questions through a private and secure live video stream. There is no traveling or waiting. The service is on demand when and where it is needed, no matter where the mother is located.”

A six-week trial run, including five mothers and 15 breastfeeding counsellors, just ended on April 13. Trial participant Sarah Bailey said the video calls didn’t feel invasive, and a counselor was able to correct her technique right away:

“It’s great to be able to video call someone who can give you a few pointers from a mother’s point of view, literally and figuratively.”

A few of the downsides include Google Glass’s short battery life and Internet connectivity issues. But connection is the foundation of this project. In the absence of the traditional help from older women in the family, ABA is trying to connect new moms through Glass. In a statement, the ABA said it’s attempting to “further explore the concept of video call/real time chat options” to continue providing support. However, Google Glass is not currently sold in Australia.

If the kinks are worked out, think about the positive implications this tech could have for other areas of education.