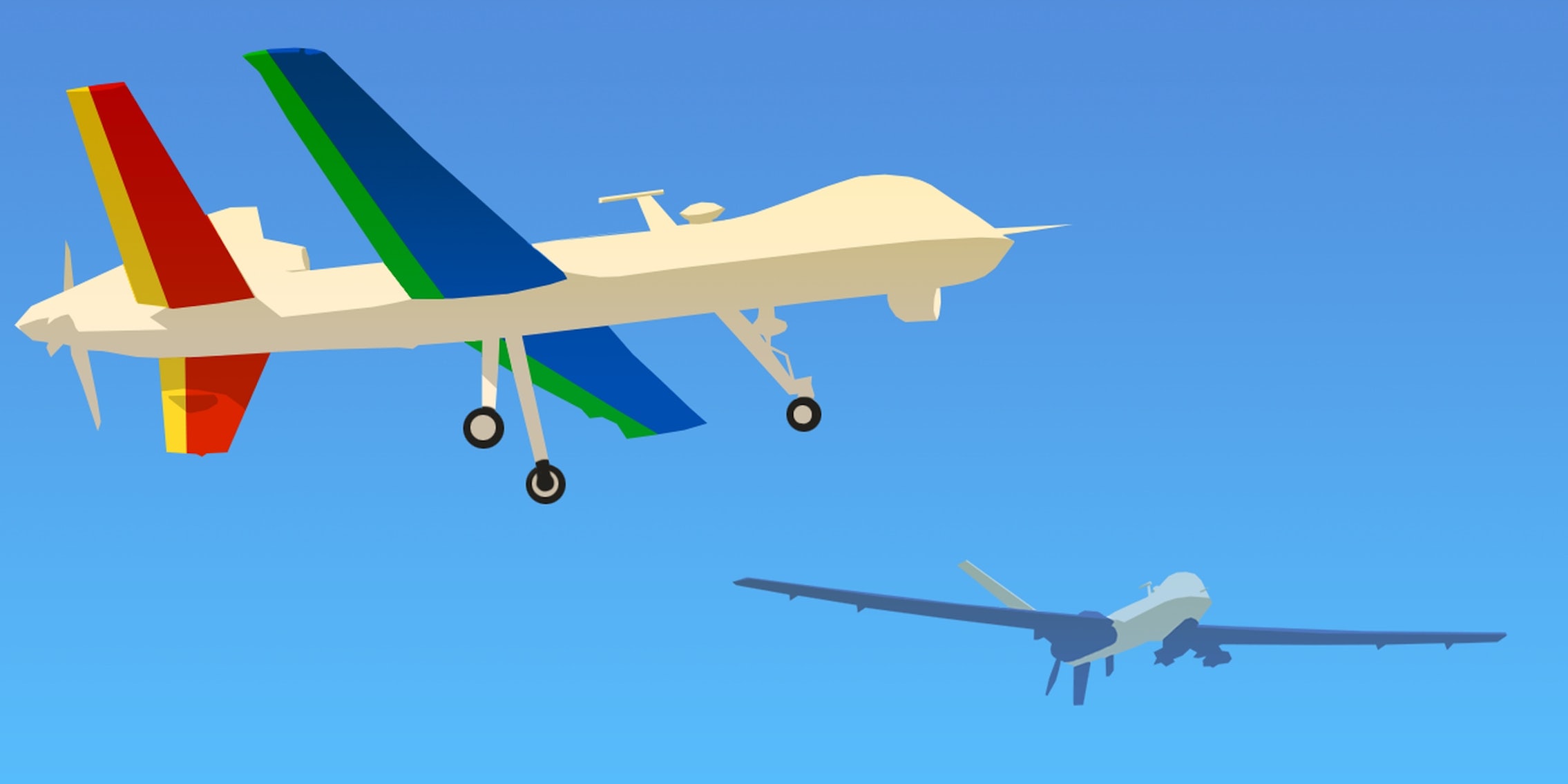 If you’re reading this, the fight has shifted from trying to obtain your information.

Titan Aerospace is the developer of solar-powered drones that can fly at an altitude of 65,000 feet for up to five years without landing. Over the last year, it has become a foregone conclusion that any company with futuristic technology like Titan Aerospace would end up on the radar of the forever-expanding Google, or the newest conglomerate, Facebook.

After interest from both Facebook and Google, Titan Aerospace was acquired by Google. Unwilling to be left out of the flying robot party, Facebook also acquired a drone maker in March, picking up Titan Aerospace competitor Ascenta, to little fanfare. For those asking why two of the largest Internet companies on earth would want to own a fleet of drones, the answer is a worldwide Internet network.

Project Loon was Google’s first step in creating that global Internet network. Utilizing specialized balloons that float in the stratosphere, Google is attempting to provide broadband Internet to large swaths of the disconnected many, without actually having to lay cable or fiber lines, as the cost of infrastructure is one of the biggest factors in the lack of Internet penetration across the globe. Project Loon has been successful in early tests, with parts of New Zealand receiving Internet access from the balloons in a pilot test. The plan is for the balloons to circle the globe in rings—the pilot program has already clocked more than 300,000 miles, with a single balloon only taking 22 days to travel around the world.

Last year, the UN estimated that 2.7 billion people currently use the Internet, leaving 61 percent of the world without what has quickly become a necessary utility. With over 4 billion people without access or the ability to use the Internet on a daily basis, Google won’t be lacking competition to provide broadband worldwide. Google’s biggest challenger is Internet.org, “a global partnership between technology leaders, nonprofits, local communities and experts who are working together to bring the internet to the two thirds of the world’s population that doesn’t have it.”

Formed in 2013 and backed by a coalition of companies including Samsung, Nokia, and Facebook, Internet.org is attempting to “connect the next 5 billion people,” according to Facebook CEO Mark Zuckergberg, who is the public leader of the group. “The Internet is such an important thing for driving humanity forward, but it’s not going to build itself,” Zuckerberg told The New York Times during the Internet.org launch last year. Internet.org has shown itself to be somewhat successful in its early pursuits of connecting more people, striking deals with mobile operators in the Philippines and Paraguay that helped get 3 million people online.

“But partnerships are only part of the solution,” Zuckerberg wrote. “To connect everyone in the world, we also need to invent new technologies that can solve some of the physical barriers to connectivity.”

To further their stated goal of connecting the world, Internet.org created The Connectivity Lab at Facebook, which is tasked with developing the tools and “exploring a variety of technologies, including high-altitude long-endurance planes, satellites, and lasers,” that will be needed to make low–cost Internet access feasible worldwide. The Ascenta acquisition was an integral part of the launch of The Connectivity Lab, with key members of the team that worked on the Zephyr—a solar-powered drone drone which stayed airborne for two weeks, smashing every UAV endurance record before being brought down voluntarily—coming aboard to work on “connectivity aircraft” for Internet.org, according to Zuckerberg.

Those coming over from Ascenta will have a major task ahead of them, not to mention a dramatic shift in directive. Ascenta built solar-powered drones that were “designed for survey and real-time monitoring of detected signals or targeted information,” and that were “ideal for border surveillance, anti-poaching, communications intercept or private comms,” according to a press release under the former name of Ascenta, High Altitude Design, a fact initially uncovered by Quartz.

For Google, Titan Aerospace will be equally, if not more important, as its ability to build a global Internet network without outside assistance is doubted by many, including Zuckerberg. “No one company can really do this by itself,” Zuckerberg told The New York Times. Based in New Mexico (where it will continue operating from), Titan Aerospace is the leader in its field—Facebook tried and failed to purchase it—and is expected to give Google, which already has experience as an Internet service provider with Google Fiber (albeit through fiber optics, not stratospheric drone satellites) an advantage in its race against Facebook and Internet.org to connect the rest of the world.

All of this posturing about connecting the world and making it a better place from your mother’s favorite place to post your old photos, and being the only search engine any rational person would use are not the real reasons Facebook and Google are taking the lead in building these networks. Information has become the most valuable commodity, and there are no greater non-governmental holders of your information than Facebook and Google.

Over 4 billion people without the Internet means 4 billion potential customer acquisitions for Facebook and Google. Google and Facebook have well over a billion users on each of their platforms. In fact, 44 percent of all Internet users have a Facebook account that they use monthly at the least. If that rate stays the same, and Facebook can connect the 5 billion people it is aiming for, it will put them well over 3 billion users—3 billion people that are willfully putting their information online for Facebook to sell ads against—an opportunity that can’t be overlooked, no matter how strange a social network purchasing a drone company appears to many.

44 percent of all Internet users have a Facebook account that they use monthly at the least. This isn’t a race to connect the world for the social good, this is a race to connect the world to your specific network to outrun the soon-ending promise of future potential. Facebook has used long-term outlooks to keep their investors happy, and when there are over 4 billion potential untapped users, and only 83 million broadband subscribers in the U.S., it gets the benefit of the doubt. It’s not the same case when everyone has access to the Internet.

On the other hand, Google sees Facebook turning into more of a threat than ever and something that is truly terrifying. Facebook has become the newest tech conglomerate, scooping up promising companies as Google did in years past, but not integrating them into Facebook—which these days has the name recognition only a mother could get excited about—but keeping them separate (Instagram, WhatsApp, Oculus VR), a habit Google has picked up on and adopted (Motorola, Nest).

If you’re reading this, the fight has shifted from trying to obtain your information. Chances are, between the two of them, Google and Facebook probably already have it. The battle is now for the information of those who don’t have access. Just as you once did, the new users will give it up willingly and gleefully, and Google and Facebook will make a ton of money. But for the first time in a long time, a battle between two of the largest multinational corporations in the world may turn out well for the users. A worldwide Internet network is a wonderful consolation prize.