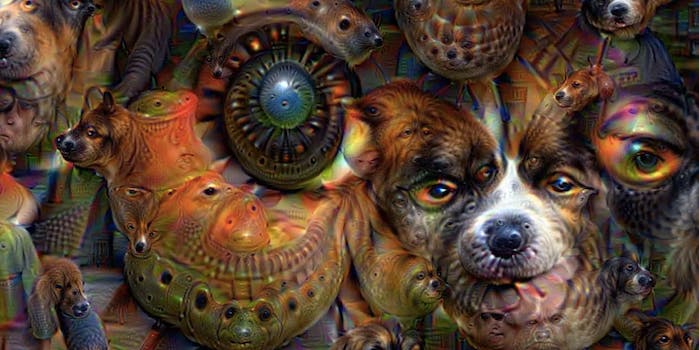 Dive deep into the trippy, terrifying art produced by a computer’s artificial brain

Time to take a trip.

When Google released its DeepDream code for visualizing how computers learn to identify images through the company’s artificial neural networks, trippy images created with the image recognition software began to spring up around the Internet.

Google trains computers to recognize images by feeding them millions of photos of the same object—for instance, a banana is a yellow, rounded piece of fruit that comes in bunches. The programs can then learn how to discriminate between different objects and recognize a banana from a mango.

As Google and others realized, these neural networks that identify images can also make some creepy and stunning bits of art. You might have seen the photos of flower dogs or fish with human eyeballs making their way around the Web, thanks to creative minds messing with DeepDream.

To show the computer’s analysis of images as it happens, developer and artist Johan Nordberg created a video that takes viewers “inside an artificial brain.” It starts off with a frame of noise, and continues through multiple layers of artificial neural networks. Nordberg explained the project:

Each frame is recursively fed back to the network starting with a frame of random noise. Every 100 frames (4 seconds) the next layer is targeted until the lowest layer is reached.

Layer upon layer begins to transform into even weirder, more frightening images until the computer’s brain looks a bit like a nightmarish acid trip. With each new layer, Google’s software identifies and hones in on a shape or bit of an image it finds familiar. The repeating pattern of layer recognition-enhancement gives us dogs and human eyes very quickly.

Nordberg’s dive into image recognition is just one of the ways developers are taking advantage of DeepDream.

Samim Winiger took Google’s DeepDream software and created an animation tool that lets anyone take frames from videos and put them through the software to create a video file that shows you what a computer might see.

There are some tools that let people with no programming experience try their hand at creating images through DeepDream. Psychic VR Lab’s simple interface lets you upload a photo from your computer and the site will run it through DeepDream—though thanks to the massive popularity of DeepDream and the number of people wanting to see their photos through a computer’s eyes, it could take up to a week for Psychic VR Lab to generate an image.

Thanks to Google’s artificial neural networks, we now have a better understanding of just how computers learn to recognize images. But we also have new fodder for nightmares and artistic renderings alike.