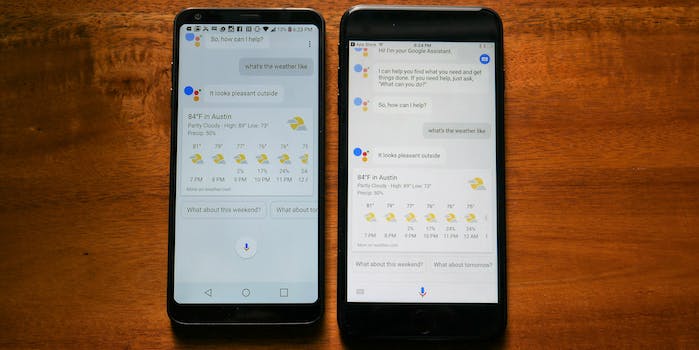 Google’s version of Siri is now available on iPhones

Step aside Siri, Google Assistant is now on the iPhone.

Google announced during its I/O keynote it would bring its personal voice-guided assistant to iOS today. It comes in the form of a separate application that can be downloaded from the App Store.

Starting today, we're bringing the #GoogleAssistant to iPhones. Whether at home or on the go, your Assistant is here to help. #io17 pic.twitter.com/a6T20HwnU9

The Google Assistant on iOS looks very similar to the Android version. To use it, press on the microphone on the bottom of the screen, and either ask a question or give a demand. You can also type out your wish by switching to the keyboard, or use your voice by enabling the “OK, Google” prompt.

Not everything will work the same on both Android and iOS. Google says there are API restrictions with its iOS app, so functionality is a bit limited— you won’t be able to set an alarm, for example. You’ll also have to open up the app every time you want to use it since the home button on the iPhone can’t be customized to use anything but Siri.

Despite those limitations, the Google Assistant offers a welcome alternative to an aging Siri—one that many believe is already several steps behind.

The company announced a number of new features focused around AI at its I/O conference Wednesday. You can read all about them in our overview article.