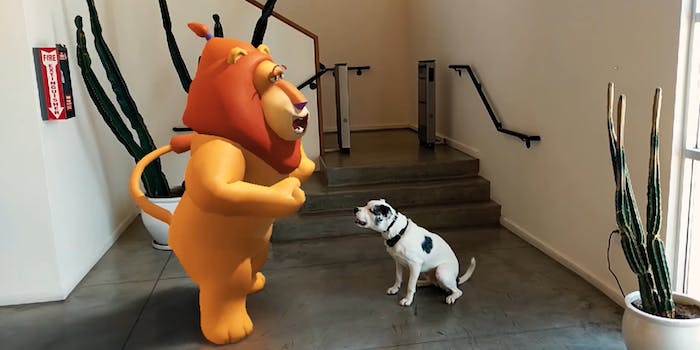 Google goes after Apple with its new augmented reality platform

There's no word yet on when ARCore will be released to the public.

Apple is on the verge of releasing its ARKit augmented reality framework with iOS 11, but not before its archrival steps in to steal some of the spotlight.

Google just released a developer preview for ARCore, a new platform for bringing AR capabilities to Android devices. In a blog post, Android Engineer Dave Burke said, “ARCore will run on millions of devices, starting today with the Pixel and Samsung’s Galaxy S8, running 7.0 Nougat and above.”

The idea is to make the creation of AR apps easier using a series of tools, frameworks, and APIs. Google will work with its hardware partners Samsung, Huawei, LG, and Asus to make sure more than 100 million devices are compatible with upcoming mixed-reality content. A continuation of Google’s Tango AR computing platform, ARCore does not need any additional hardware to function, so all new devices running Android are ready to go.

Google showed off the power of its platform and the remarkable possibilities of augmented reality in a promo video. You can see below how devs used ARCore to put digital characters in the real world. The video shows the uncanny scenes of the Tin Man from The Wizard of Oz awkwardly standing in someone’s living room and the Scarecrow ordering from a food truck.

ARCore runs on Java/OpenGL and game engines Unity and Unreal. It is optimized for motion tracking to determine the position and orientation of a phone as it moves, environmental understanding for detecting horizontal surfaces, and light estimation to make virtual objects blend in with the lighting of a room.

You can check out the company’s “AR Experiments” site to see pictures and videos of projects made using ARCore. Google didn’t give a release date for ARCore, but we should expect to see more of it later this year—perhaps at the Pixel 2 launch?