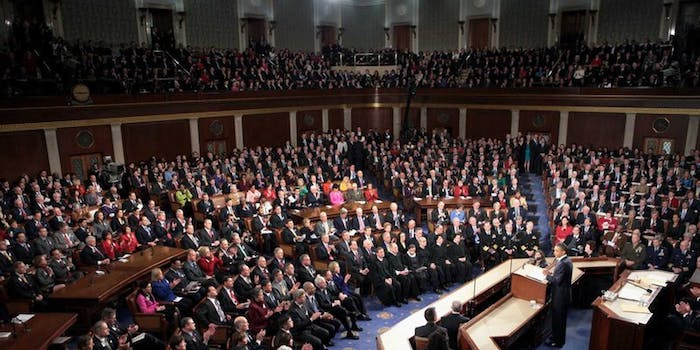 Are Republicans a better bet for NSA-spying and patent reform?

Or will Congress never accomplish anything ever again?

House Judiciary Chairman Rep. Bob Goodlatte (R – Va.) recently sat down for an interview on C-SPAN’s Newsmakers talking head chat show. During the interview, Goodlatte said something that should catch the ear of anyone interested in how a Congress that’s famously entering the least productive period in it’s history might approach tech policy over the next two years.

Goodlatte insisted that, if the voting public were to give Republicans control of the Senate in November, the first two items on the party’s agenda will be passing bills reforming the National Security Agency (NSA) and cracking down on patent trolls—issues that have long been on the tech community’s legislative wish list.

Goodlatte’s comments come within the first minute of the video:

Goodlatte argued that the reason a Republican-controlled Senate would take up these efforts right off the bat is because bills on NSA reform (the USA Freedom Act) and patent reform (the Innovation Act) were both passed with wide bipartisan support in the House and have revived the vocal support of President Obama—making a presidential veto unlikely.

The statistics gurus at FiveThirtyEight pegged the odds of the Senate changing hands in November at nearly 58 percent; however, for average American citizens who would just like to see either of these bills (or really any major bill) passed, the question remains: Are patent and NSA surveillance reform more likely to happen with the GOP in control of the entire legislative branch?

Introduced by Sen. Pat Leahy, the USA Freedom Act would end the bulk collection of email and cellphone metadata—meaning that the government would need to have some sort of specific criteria for collecting a given piece of personal data instead of just gobbling up all it can and then figuring out what to do with it later. The bill also boosts transparency within the system by increasing the reporting requirements for intelligence agencies.

The legislation does have its critics, but eventually managed to garner the enthusiastic support of privacy advocates and civil liberties groups.

“Not sure how much easier it would be [to pass the bill] if we had a unitary Senate,” Mark Jaycox, a legislative analyst at the Electronic Frontier Foundation (EFF), tells the Daily Dot. “It’s hard to say what a GOP Senate would do. The USA Freedom Act is currently working its way through Congress, it’s not being stalled by Democratic leadership.”

Jaycox insists that what’s stopped the USA Freedom Act from making it to the President’s desk thus far is the Senate’s crammed legislative calendar—something that would apply equally to a Republican Senate. There are more pressing issues that constantly flare up and need to be immediately dealt with.

In fact, switching control of the Senate may actually delay the passage of the USA Freedom Act because there’s a tendency for new majority parties to rewrite bills that were introduced in the previous session, even on issues where there’s broad agreement. “We’d encourage a GOP Senate to take up the USA Freedom Act as written because changing even small details on something like that could have major implications,” Joycox says.

He adds that it might be wise to take Goodlatte’s strong words about putting checks on the government’s ability to conduct domestic electronic surveillance with a grain of salt. Jaycox notes that the Email Privacy Act, which has received over 260 co-sponsors in the House, is currently wasting away in Goodlatte’s Judiciary Committee. The Email Privacy Act would require any federal law enforcement agency to get a warrant, signed by a judge, before accessing electronic data, such as private tweets or emails. These rules would replace the current system of subpoenas, which don’t require that additional level of outside oversight.

“It’s encouraging to hear him say that NSA reform … is a priority for the next Congress, but we should be focusing on what Congress could be doing right now,” Jaycox insists.

When it comes to patent reform, Goodlatte’s claims about Republicans being a better bet for getting something done is likely accurate. It’s an issue close to Goodlatte’s heart because he’s the author of the House bill aimed at cutting off patent trolls at the knees, the Innovation Act.

The Senate version of Goodlatte’s bill, also authored by Leahy, would have made it significantly more difficult for individuals and companies to buy up the rights to patents, primarily in the software industry, and then aggressively file lawsuits against any company doing anything even remotely related to the patented technology. It’s a process called “patent trolling” and the tech industry hates it because it effectively acts as a private tax on any product that is theoretically in the purview of a troll’s patent.

Patent reform of the kind found in the Innovation Act would, among other things, allow manufacturers of products used by other businesses to better defend their products against patent trolls. Since patent legislation can be mind-bogglingly complicated and expensive, many smaller companies will immediately pay to settle out of court rather than deal with getting stuck in a seemingly endless legal morass. However, if a deep-pocketed manufacturer can step in and defend its products, the issue of patent trolls doing things like going after coffee shops for using standard, commercially available Wi-Fi wouldn’t be as much of an issue.

Patent reform was supported by a majority of both Democrats and Republicans in the House. It would certainly sail through the Senate with ease. Obama has indicated he’d sign it in a heartbeat. So, why isn’t it already the law of the land?

“The thing that happened in the Senate is that Harry Reid stopped the legislation,” says Julie Samuels, executive director of the tech-startup political advocacy group Engine Advocacy. “The trial lawyers and the pharmaceutical industry got to Reid. He instructed Leahy, who would have been responsible for moving it out of committee, not to go forward with the bill.”

It was a move that Leahy wasn’t particularly happy about. “I am furious with what happened,” he told the Burlington Free Press in July. “We worked so hard to get a coalition. Harry Reid and a couple of others said, ‘We won’t let it come to the floor.’ I think that’s wrong, but I’m not going to give up.”

Samuels insists that, while conducting patent troll litigation is an increasingly lucrative business, the trail lawyer lobby doesn’t particularly care all that much about protecting the parasitic business model of patent trolls. What they care about, instead, is anything that even gives off the hint of tort reform. “They don’t want anyone to mess with any type of litigation because they have a system that fits their vision for how things should work,” she says. “They really worry about the proverbial slippery slope—if you do this here, it’s going to happen across the board.”

The issue is similar for the pharmaceutical industry, which, with its drawn-out and expensive process of getting drugs approved, has a very large interest in ensuring its drug patents are protected.

“The Innovation Act doesn’t really affect … [the pharmaceutical industry] directly, but I think there’s still reluctance to see reform,” says Daniel Nazer, a staff attorney at the EFF, who focuses in intellectual property issues. “There’s a big fear of anything that could theoretically be interpreted to weaken patents somewhere down the line.”

Nazer asserts that this fear is largely unwarranted because, as it’s currently written, the patent reform legislation is tightly targeted at curbing patent trolling rather than blocking claims of legitimate intellectual property infringement. Additionally, Nazer argues, there’s very little patent trolling in the pharmaceutical world because, as opposed to ones relating to software, drug patents have to be much more specific. “You can’t get a patent just for a molecule that decreases a patient’s pain response,” he says. “Pharma patents have to describe a real invention.”

The tech community has been pushing hard for patent reform. But actively promoting their agenda in a coordinated way is a relatively recent development, while groups like trial lawyers and pharmaceutical companies have had years of experience in the dance that is congressional-influence peddling.

While the perception is that the tech industry leans left—Google employees did donate over $800,000 to President Obama’s re-election campaign, the third highest amount of any company—the GOP has made moves to embrace the tech world. Earlier this year, for example, the Republican National Committee circulated an online petition in support of Uber over laws, often dating back generations, imposed by local governments around the country that block the transit-networking company’s operation.

At the end of the day, when it comes to NSA reform, it probably doesn’t matter which party holds the Senate. However, while big pharma spreads the lobbying love around to both parties relatively equally, trial lawyers are a solidly Democratic constituency, so the Senate changing hands would significantly reduce their voice in the process. So, Goodlatte’s claims of GOP-controlled being more likely to pass patent reform may be at least a little more than mere bluster.