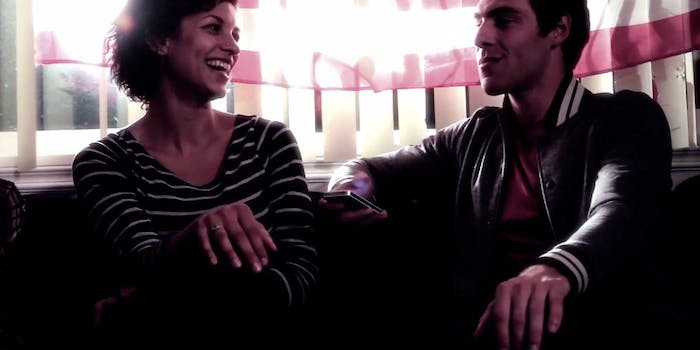 In other words, it'll tell people whether you're DTF.

In recent months, there’s been a lot of controversy and a fair amount of confusion over the idea of affirmative consent, which requires that both parties offer explicit verbal confirmation that they want to have sex prior to the act itself. (In other words, “Yes means yes,” rather than “No means no.”) But one app is seeking to clear up some of that confusion. It’s called Good2Go, and it’s trying to reduce sexual assault by asking people if they want to have sex on the app.

Basically, here’s how it works: Two people meet at a party. (Let’s call them “Luis” and “Gordon,” because I watched Sesame Street on YouTube earlier today and why not.) When things start getting hot and heavy, Luis whips out Good2Go on his phone, which gives Gordon three options: “I’m good2go,” “No thanks,” and “Yes, but we need to talk.”

But if Gordon selects any of the other options, he’ll be Good2Go and the app will ask him to provide a phone number to verify his identity. (The app’s creators say the information is kept private.) Then he and Luis can proceed to have raunchy, sweaty, protected sex all night until Bob knocks on the door, pulls up Good2Go on his phone, and asks if he can join in. (Thus concludes the plot of my Sesame Street slash fiction. You’re welcome.)

The app is a little confusing, and frankly not all that pragmatic. For instance, it’s not that difficult to lie on a self-reported sobriety test, especially considering how difficult it is for people to gauge their own intoxication levels. Furthermore, Good2Go’s creators Lee Ann and Mike Allman say that the app doesn’t count as a legally binding contract if any sexual assault allegations arise after sex, which makes it pretty much useless if someone says they’re not interested in having sex and assault occurs regardless.

But perhaps the most flawed aspect of Good2Go—and the one that conservative pundits and critics of affirmative consent are most likely to sniff at—is that most people who are about to have sex simply don’t have the foresight to have an elaborate discussion about consent mid-action. When you’re in the heat of the moment, it’s not always easy (or sexy) to stop short and have these types of conversations, so imagine how difficult it would be mid-foreplay to rummage around your pants pockets for your phone and spend five minutes on the app.

Of course, the fact that it’s not always fun or sexy to have structured conversations about consent doesn’t negate the necessity of having these conversations, which is why, if nothing else, Good2Go is at least a good launchpad for partners to have a discussion about their limitations and comfort zones before actually having sex.

In a perfect world, would we need an app to tell us when it is and isn’t OK to have sex? Of course not. But considering approximately 1 in 5 college women have experienced sexual assault, we clearly don’t live in a perfect world, and in this sense Good2Go is at least a step in the right direction.