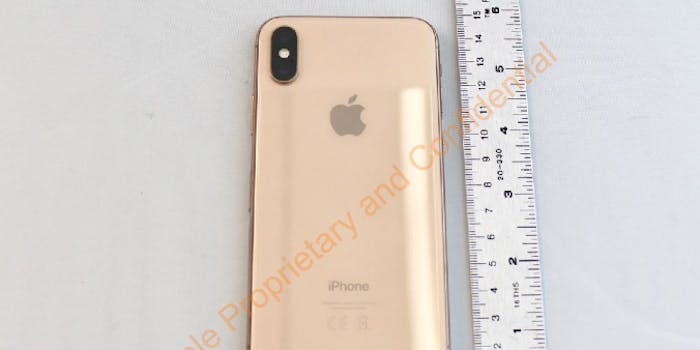 Leaked photos of the gold iPhone X have hit the internet

It's still unclear if it's hitting shelves, though.

If you’ve been holding out for a gold iPhone X, you may be in luck.

A filing from Apple at the Federal Communications Commission has revealed images of an unreleased gold version of the iPhone X.

It’s not unusual for device designs to be leaked through the FCC, since the U.S. agency approves them for sale. There’s a 180-day confidentiality period on FCC photos after filing, and that window just recently lapsed for these gold iPhone pics, so now we have an official view of what a new iPhone X colorway could look like.

This FCC appearance might mean one of two things: Either a gold iPhone X is on its way, or the color was part of the original launch and ended up getting canceled. As the Verge points out, the phone’s glass backplate features the same gold tone as the iPhone 8 and 8 Plus that Apple released in September. Because the FCC filing was created last August and submitted in September, four days before the iPhone X was announced, some outlets are speculating that this might be a case of the latter.

But in the “maybe it’s coming soon” column, phone leaker Benjamin Geskin claimed last month that a blush gold iPhone was in production—so new colors are already being buzzed about at the moment.

Whatever the case, the gold phones look nice.