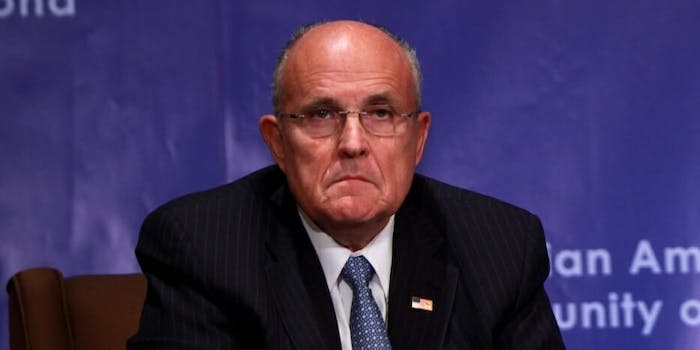 The former New York mayor insists there was 'no campaign violation'

“The payment was made to resolve a personal and false allegation in order to protect the President’s family,” Giuliani said. “It would have been done in any event, whether he was a candidate or not.”

The statement came just hours after Trump told reporters that Giuliani, only on the job a day, was a “great guy” who would eventually “get his facts straight.”

“Imagine if [Daniels’ allegations] came out on October 15, 2016, in the middle of the, you know, last debate with Hillary Clinton … Cohen didn’t even ask. Cohen made it go away. He did his job,” Giuliani had told host Sean Hannity.

News of the payment broke in January, but Trump had denied knowledge of it when asked directly by reporters in April. On Thursday morning, however, the president tweeted that he had paid Daniels to keep quiet.

Mr. Cohen, an attorney, received a monthly retainer, not from the campaign and having nothing to do with the campaign, from which he entered into, through reimbursement, a private contract between two parties, known as a non-disclosure agreement, or NDA. These agreements are…..

…very common among celebrities and people of wealth. In this case it is in full force and effect and will be used in Arbitration for damages against Ms. Clifford (Daniels). The agreement was used to stop the false and extortionist accusations made by her about an affair,……

…despite already having signed a detailed letter admitting that there was no affair. Prior to its violation by Ms. Clifford and her attorney, this was a private agreement. Money from the campaign, or campaign contributions, played no roll in this transaction.

The possible violation of campaign expenditure rules is not about which bank account the payment came from but whether the payment, which was not reported to the Federal Election Commission, was intended to meant to influence the election.

Giuliani, regardless of getting his story straight, may have opened up a whole new problem for Trump.