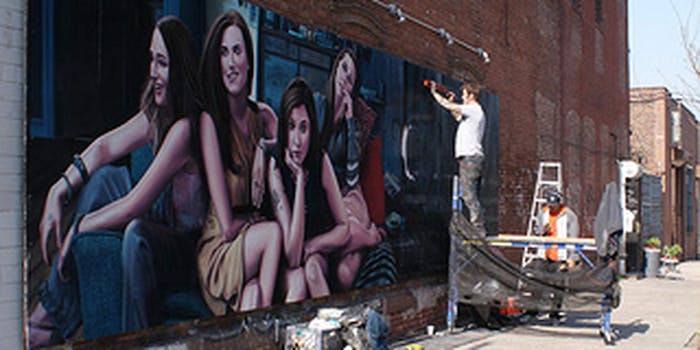 One of these attempts at natural advertising is not like the other.

Advertising is effective when it makes people feel like the ad is meant for them. Not to get all Don Draper on you, but when an advertising campaign successfully tells someone, “We are speaking to you… we get you,” consumers are way more likely to buy whatever the campaign is selling. When it comes to the industry of persuasion, establishing an emotional connection with the ad target is vital.

Which is why two campaigns to promote television shows using social media are so notable: both advertising bids for HBO’s Girls and Fox’s The Mindy Project are using novel methods to engage with their targets in what I’d call “intimacy advertising.”

The platform of choice for Girls is Snapchat. At the third season premiere for the HBO comedy about flailing post-grad Brooklynites, fans of the show were treated to a series of snaps showing showrunner Lena Dunham and co-stars Zosia Mamet, Jemima Kirke, Allison Williams, and famous guest stars like Amy Schumer engaging in red carpet schmoozing.

Open @Snapchat. Go to “My Friends” screen. Click the + man at the top right. Click the Search magnifying glass on the right. Type GIRLSHBO!

If you dont have @girlsHBO on snapchat your missing out pic.twitter.com/OBmZhk1Pj9

The snaps from @girlsHBO are so entertaining and Allison Williams is just plain adorable. 👍😄👯👯 pic.twitter.com/2eI780EcPx

Girls  is certainly not the first brand to embrace Snapchat, but this platform is especially well-suited to keeping fans of television shows engaged, and that this campaign is smart. It doesn’t invade fan feeds, it coaxes engagement by offering unique “behind-the-scenes” snapshots. And since Girls is targeting a younger demographic, Snapchat is the perfect way to keep fans excited about the program because it makes a promotional effort feel like part of a conversation between the program and the viewer. It doesn’t hurt that both Girls and Snapchat have a sexy edge, and honestly, Snapchat is an app that the characters of the show would be likely to use (sans Jessa, obviously).

All of things make them a good fit, and users are left with an illusion of intimacy.

The Mindy Project is also using the social Web in an unexpected way to advertise, but it’s a potentially problematic gambit. People using dating app Tinder have discovered the main characters from the show cropping up as potential mates, with complete profiles filled out for fictional protagonist Mindy Lahiri and her equally not-real work colleague Danny Castellano.

Users may be charmed by the novelty of seeing the fake profile of a TV show character interspersed between actual potential dating partners, and the campaign has generated publicity for The Mindy Project, so it’s not a failure in that way. But it’s sort of disturbing, because this will get annoying if every show comprised of and targeting “millennials” uses this medium. To argue that apps are the billboards or magazines of our day isn’t exactly fair, because a billboard is only used for advertising; Tinder is used for dating. Who wants to have to swipe through the entire Fox comedy lineup to find someone to bone down with? And what if you hadn’t seen the show and actually think you could date Danny!?

Instead of establishing an aura of intimacy with users like the Girls Snapchat campaign does, The Mindy Project’s Tinder experiment underlines the artificiality of its characters.