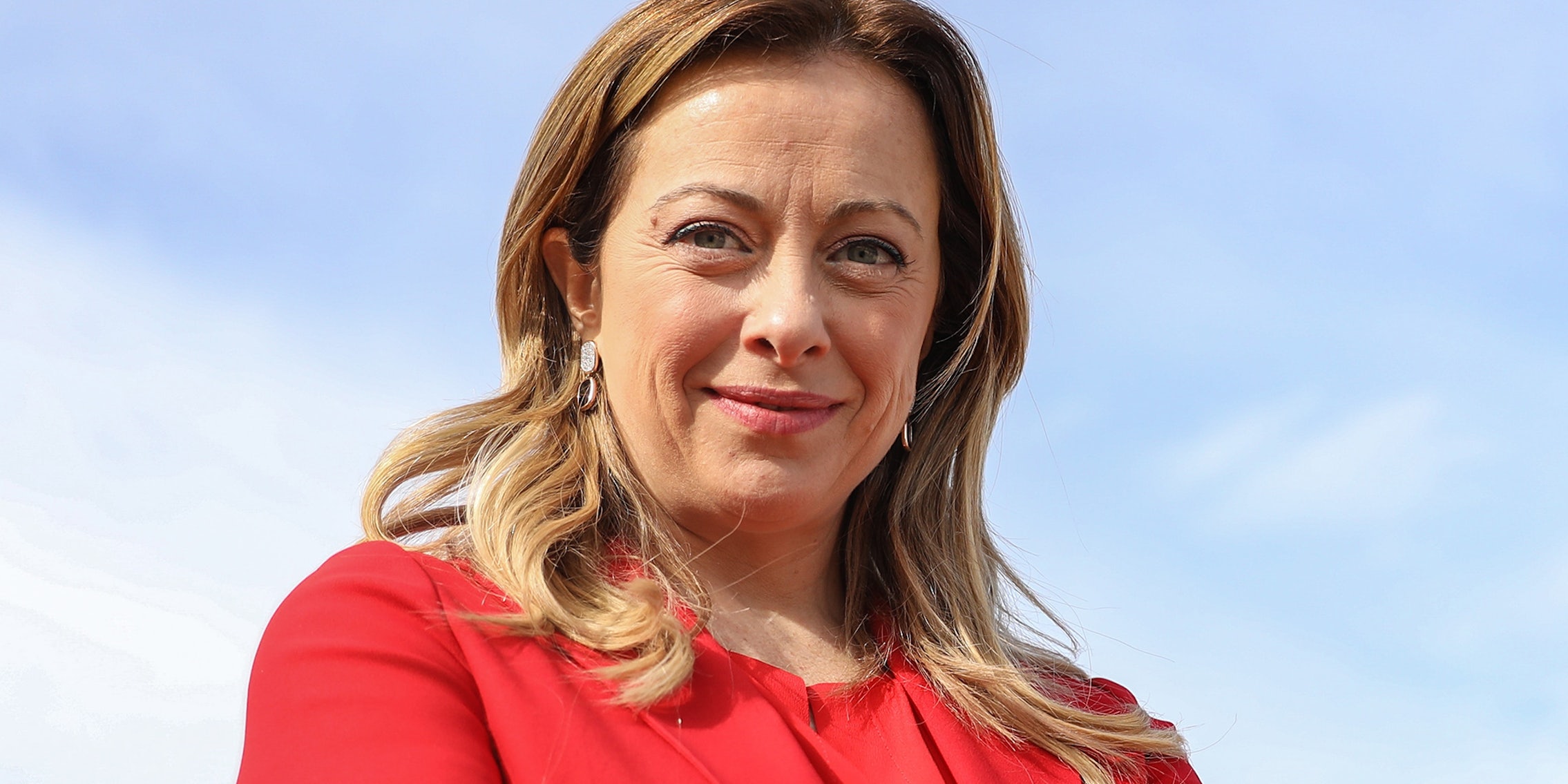 With subtle whitewashing and accusations of “biased” leftist points of views, right-wing users have purged, contested, and watered down terms related to “fascism” and the far-right on the Italian Wikipedia page for Prime Minister Giorgia Meloni.

In some cases, even the word “far-right” is deemed controversial.

The difference is especially glaring when compared to the English, French, German and Spanish versions of the same articles.

Meloni’s past and present is littered with ties to far-right movements. Her Italian page on Wikipedia mentions them, but doesn’t mark them as either “neo/post-fascist” or “far-right,” even though it labels those movements as such on their respective pages.

Meloni rode a wave of hard-right sentiment to victory, but a casual Italian Wikipedia user wouldn’t know it, giving the impression of a very conservative-leaning figure, instead of a leader of a xenophobic and post-fascist party.

It’s all part of a successful right-wing campaign to make her look more moderate.

“People have been trying to whitewash Giorgia Meloni’s article for a year now,” Maurizio Codogno, a prominent Wikimedia Italia user, said to the Daily Dot.

Meloni won the election in September with a 26% of votes, riding a rising nationalist sentiment and anti-immigration anger in Italy. Meloni is now the head of the Italian government in a center-right coalition.

In her youth, though, she was anything but center-right. In 1996, she became the leader of a post-fascist student movement, Student Action. Her current party, Brothers of Italy, which she helped found, shares many views and even its symbol with National Alliance (NA), a post-fascist party. National Alliance was the successor of the Italian Social Movement (MSI), an explicitly neo-fascist organization founded by followers of Mussolini in 1946.

Some of Meloni’s party members come from NA and MSI and have been repeatedly caught with Mussolini’s memorabilia at home. Last September, a viral video showed Brothers of Italy’s regional councilor Romano La Russa making the fascist salute at a funeral.

Her party, Brothers of Italy, frequently alludes to its neo-fascist influences. As such, both Meloni and her party have been described by the Italian and international media as neo-fascist and post-fascist.

The newly elected Prime Minister does not accept this definition.

In 2021, she depicted herself as “fiercely to the right, though distant from the fascist regime. I belong to the liberal, Christian, identity, patriotic right.” Last August, she told the international press that “fascism has been history to the Italian right for decades.”

That is true for her Wikipedia page too. The only use of the word “fascism” appears in quotes of Meloni distancing herself from it. Even the term “far-right” is only used twice in the article and it never points to her ideas or political history. It appears in a quote from the Financial Times, which compared Meloni to Marine Le Pen, and when describing her ties with other “European right-winged and far-right politicians.”

Her Wikipedia article in English is more explicit. It mentions Mussolini immediately, a choice strongly defended in the “Talk” section of the page. Terms related to “fascism” appear 23 times, pointing to Meloni’s party, youth militancy, political ties, or ideas. There is an entire section dedicated to Meloni’s relationship with fascism. A similar tone is struck in the French version, which devoted a title to the issue of “post-fascism.” The German and Spanish versions explicitly label her party and some of her past political ties as “post-fascist” and “neo-fascist.”

All quote the opinion of international observers and media.

But in Italy, the debate is unsettled.

“In a way, you cannot do without the label, because there is some truth in it, but it is reductive too. You can also say that Donald Trump is a fascist, but things are more complex than this,” Italian journalist Mattia Salvia explained to the Daily Dot. “You should make a distinction. In today’s world, dominated by Liberalism, the extremist wings of the political spectrum have to moderate themselves if they want to govern. If Giorgia Meloni had remained a fascist, she wouldn’t have become Prime Minister. But now she has become a liberal-conservative, with some cosmetic ties to fascism.”

Nevertheless, Salvia said, labels are still important: “You should have them on Wikipedia. When a communist party becomes a social-democratic party, you still remember that it was once a communist one … [you] should find this label in Meloni’s article.”

But even when you do have labels, they are not easy to keep on a crowd-sourced website..

The Italian Wikipedia page for the youth movement Student Action is modified on a weekly basis to delete any parts describing it as “far-right,” “neo-fascist” and “affiliated with Brothers of Italy.” It occurred three times while writing this article.

A similar attempt happened in September for Meloni’s page, according to the Italian newspaper Domani. User @Fdimi tried to put the politician in a more positive light by adding quotes of Meloni distancing herself from fascism. @Fdimi was banned for suspected political affiliation, but the changes remained.

“Since then, the article about Meloni has been unavailable for modification to non-verified users. When an article is at risk of being heavily altered or vandalized, during edit warring (when editors disagree over a page and constantly override each other’s work) or elections, admins use crowd control and blocks to protect the page and maintain its neutrality,” said Codogno, who works with Wikimedia Italia.

Codogno agreed to talk only on the condition that his words were considered his personal opinion as a Wikipedia user with 18 years of experience, and not on the behalf of Wikimedia, because, he said, “as an association, we cannot interfere over Wikipedia’s dynamics.”

“People have been trying to whitewash Giorgia Meloni’s article for a year now, but sometimes it is not a question of political ideas, but of what can be considered relevant for a Wikipedia page,” added Codogno.

The prime minister’s views on fascism were at first added to a paragraph titled “Controversies.” After many arguments, it was deleted last September, as part of a wider effort to cancel non-neutral sections on Wikipedia. Its contents about fascism were nevertheless condensed under “Political views,” but mainly in the last few lines of the page.

“When the far-right gets to govern, it tries to look more institutionalized and credible by removing the unpresentable extremisms, though they were instrumental to gain consensus during the elections,” Italian writer Christian Raimo, who reported on far-right groups in the past, said to the Daily Dot.

In June 2021, a banner was put in place to warn the reader of potential “biases” in Meloni’s article, after a user criticized the tone of the page for showing a leftist point of view. The article has been subject to episodes of vandalism from leftist users.

The page for Brothers of Italy, which is clear about neo/post-fascism ties both in Italian and English, has also been put under protection as well. The most edited parts concern the ideology of the party and how to define it in the lead.

It is an ongoing argument of discussion in the “Talk” section, with some even considering the term “far-right” derogatory, as in Italy the “apology of fascism” is a crime.

Neo-fascist and post-fascist groups have often escaped prosecution. But conversely, branding them as explicitly fascist in Italy, where defamation cases by politicians are easier to bring, can be tricky.

Which can explain some of the reticence on Meloni’s page.

“Can an Italian encyclopedia talk of post-fascism? If we’ll have enough authoritative sources that say that Meloni is post-fascist, then we’ll write it,” said Codogno.

Gabriele Di Donfrancesco is a Rome-based freelance journalist covering social media and culture. His works have been published in La Repubblica, Mashable Italia, and Rolling Stone, among others.