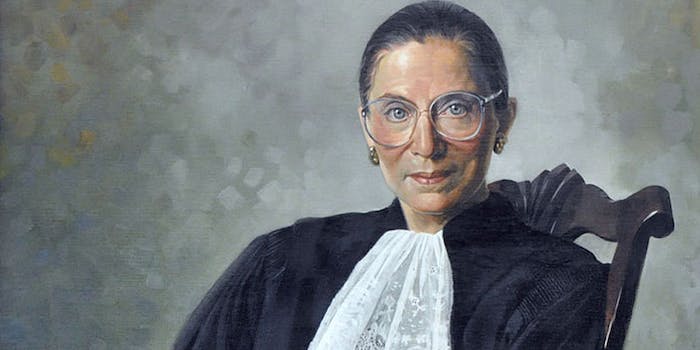 In most Supreme Court cases, the majority opinion gets infinitely more attention than the dissenting one. However, the dissent penned by Ruth Bader Ginsburg in Burwell v. Hobby Lobby is not most opinions.

The case, in which the a 5-4 majority on the court ruled that private companies can claim a religious exemption to providing certain types of birth control to employees, instantly sparked massive outrage among the pro-choice community. Ginsburg’s impassioned, 35-page dissent managed to encapsulate that sentiment perfectly, and, unlike most documents coming out of the nation’s highest court, it went viral.

Since it’s 2014, pretty much everything that goes viral is eventually turned into a song and uploaded to YouTube, and Ginsburg’s dissent is no exception.

The video is the work of singer/songwriter Jonathan Mann, who manages to make earworms out of lines like, ?It bares note that the cost of an IUD is nearly equivalent to a month’s full time pay for workers making minimum wage” and ?Any decision to use contraceptives is not propelled by the government its the woman’s autonomous choice informed by her doctor.” This is no easy feat.

The song primarily uses lines from Ginsburg’s dissent as its lyrics, but Mann managed to add his own creative spin. At least, we’re pretty sure the former American Civil Liberties Union general counsel didn’t actually use the term ?slut-shaming geezers” herself.

Mann’s desire to turn an landmark legal battle about abortion rights into a catchy pop song likely wasn’t exclusively motivated by politics. Every day since 2009, Mann has written a song and posted a video of it to YouTube. This video is number 2,007. Other standouts in the series include ?A Duet with Siri” and ?Hey Paul Krugman.”

You can read Ginsberg’s entire opinion here or get the Reader’s Digest version here.

Correction: An early version of this article used an outdated name for the Hobby Lobby case.