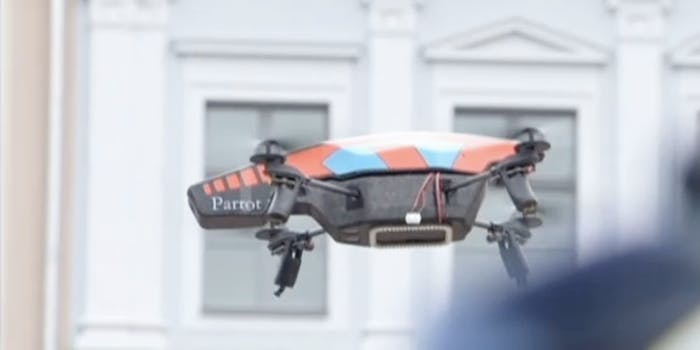 Germany has a drone problem, and the Pirate Party won't let Angela Merkel forget it

The Pirate Party of Germany has found one way to make sure that drones are a central issue in Germany’s federal elections.

Just fly one right at the Chancellor as she’s about to give a speech.

That’s what a Pirate Party member did Sunday, as Chancellor Angela Merkel stood onstage in Dresden for a campaign event, part of her bid to keep her seat in the country’s federal election on Sunday.

Unlike in English-speaking countries, the Pirate Party in many continental European countries actually gets its members elected to office. In Germany, that has largely consisted of winning seats in state legislatures.

In a statement released to the press, party representative Markus Barenhoff said “The goal of the effort was to make Chancellor Merkel and Defense Minister de Maizière realize what it’s like to be subjected to drone observation.”

It also highlights one of the Merkel administration’s biggest recent blunders, spending €500 million ($668 million U.S.) on a surveillance drone that ended up illegal to use in Europe.

The 23-year-old Party member who operated the drone from nearby was briefly taken into police custody. His name was not released.

However, unlike Merkel, he didn’t waste much money on his drone. The Parrot AR 2.0, which appears to be the one he flew, retails for $299.99 on Amazon.