Zimmerman tried to auction off the weapon via GunBroker.com. The sale itself was scheduled begin at 11am ET, and the Sanford, Florida, resident started the bidding at $5,000. Around the time the auction was scheduled to go live, however, GunBroker.com removed it.

On Feb. 26, 2012, Zimmerman killed Martin and faced charges for second-degree murder and manslaughter. He was acquitted by a Florida court on July 13, 2013.

The acquittal of Zimmerman led to the rise of the Black Lives Matter movement and incited a nationwide debate over “stand your ground” laws that allow citizens to shoot someone if they feel threatened.

In the auction description, Zimmerman refered to the item as an “American Firearm Icon.”

Zimmerman said that some proceeds from the sale will be used to combat Black Lives Matter “violence” against law enforcement, in addition to Democratic presidential front-runner Hillary Clinton‘s “anti-firearm rhetoric.” Zimmerman also plans to “ensure the demise” of State Attorney Angela Corey, who prosecuted his iconic case and faces a tough re-election campaign.

“What I’ve decided to do is not cower,” he told Gainesville, Florida’s Fox affiliate WOFL. “I’m a free American. I can do what I want with my possessions.” 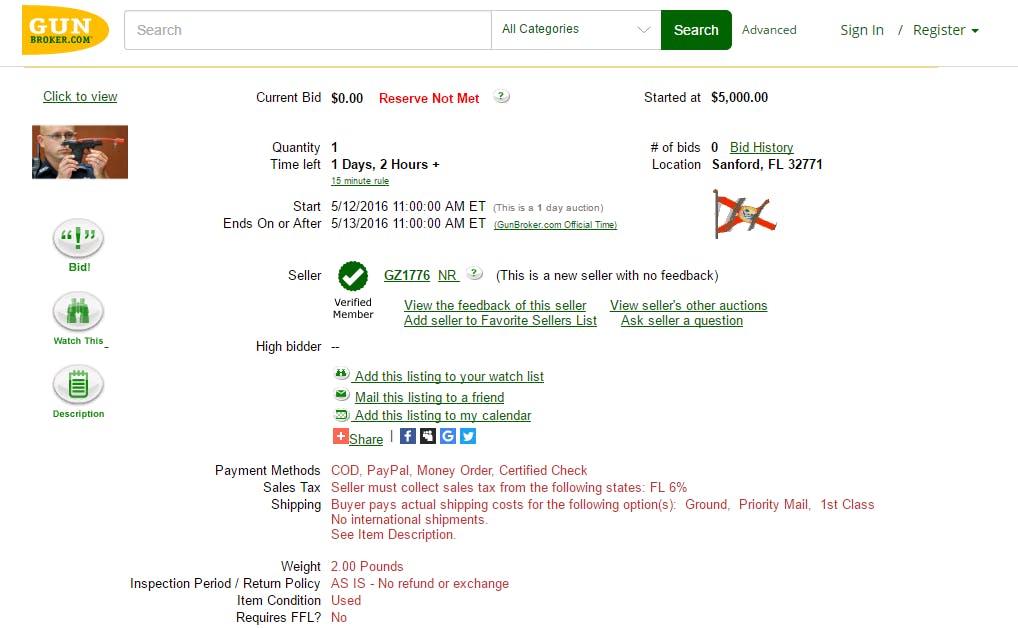 The Martin family released a statement Thursday morning declining to address the gun’s public sale and the man who took their son’s life.

Since his acquittal, Zimmerman has repeatedly made headlines for controversial actions and statements. In December, Zimmerman was suspended from Twitter after posting nude photos of his ex-girlfriend along with her personal contact information.

Update 10:30am CT, May 12: Zimmerman’s GunBroker.com auction is no longer active. The auction was set to begin at 11am ET and last one day. It is currently unclear why it was removed. GunBroker.com has not yet responded to our request for comment.

Update 4:50pm CT, May 12: GunBroker.com has released the following statement regarding the Zimmerman auction, saying, “We want no part in the listing on our web site or in any of the publicity it is receiving.” See the full statement below: