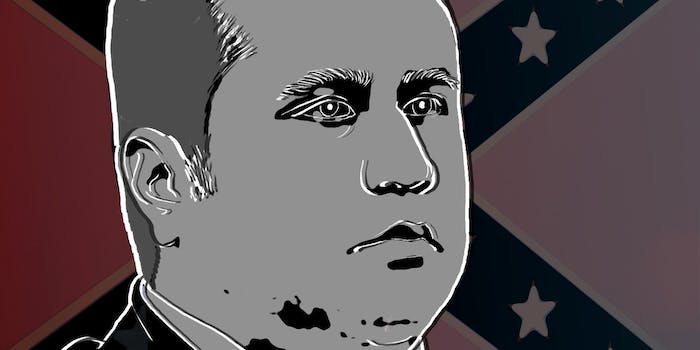 It's a match made in Florida.

Some stories are only possible in America.

George Zimmerman, who was acquitted of Martin’s murder in July 2013, and Andy Hallinan, owner of the Inverness-based Florida Gun Supply, are reportedly selling signed and numbered prints of a Confederate flag painted by Zimmerman.

Profits from the joint-venture will be split, the Washington Times reports, to help cover Zimmerman’s and Hallinan’s respective legal fees.

“The caption, ‘the 2nd protects the first,’ is a double entendre,” Zimmerman reportedly said of his painting. The canvas originally featured an image of the American flag, but Zimmerman said he painted a Confederate battle flag over it.

“The caption, ‘the 2nd protects the first,’ is a double entendre.”

During an interview on Univision last year, Zimmerman said that fighting his second-degree murder charge in the Martin case had left him homeless and over $2.5 million in debt. He was reportedly unemployed at the time.

Florida Gun Supply has been the focus of national controversy since July, when Hallinan declared it a “Muslim-free Zone” in a viral Facebook video. The Florida chapter of the Council for American-Islamic Relations (CAIR) later filed a lawsuit against Hallinan for “violating federal law” by refusing to allow Muslim customers into his store.

On July 29, Hallinan closed his business early to prevent Chris Martin, a Muslim-American who served as a U.S. Navy corpsman in the Gulf War, from entering the store. Martin told the Daily Dot that he’d travelled from California to visit Hallinan’s store because “I feel that I have some privilege to enjoy those rights that I fought for and sacrificed for.”

Hallinan told the Daily Dot in an earlier interview that he believes Islam is an inherently violent religion and that Muslims who were unwilling to commit murder in the name of Islam were not its true practitioners—a view Hallinan shares with Islamic extremist groups such as Al Qaeda.

“I think it is really a clear demonstration of the confluence of racism and Islamophobia, when you’ve got the person who shot Trayvon Martin promoting the Confederate flag, along with an individual who has declared his business a Muslim Free zone,” said Ibrahim Hooper, CAIR’s national communications director.

Florida Gun Supply has reportedly boasted that a percentage of proceeds from Zimmerman’s painting will be donated to the Boys and Girls Club of America, a youth organization that mentors over 4 million young people.

In a statement on Tuesday, the organization told the Daily Dot: “Boys & Girls Clubs of America (BGCA) and its local affiliates have no knowledge of this plan, were not approached about and did not approve the use of their name, and have issued a cease-and-desist order to the owner.”

Florida Gun Supply has not yet responded to our request for comment.

Since the Martin trial, Zimmerman has had several gun-related incidents involving the police.

In September 2013, his estranged wife called 911 and accused him of punching her father and threatening her with a gun. She declined to press charges. Two months later, Zimmerman was arrested for allegedly threatening his girlfriend with a gun. She later recanted the allegations, forcing prosecutors to drop a felony charge of aggravated assault.