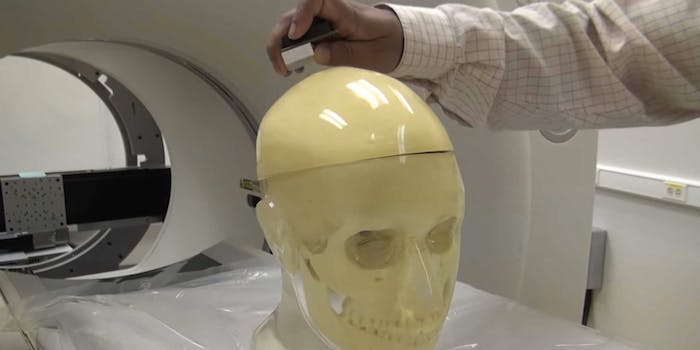 The human brain is the most complex yet elusive part of our bodies, and for many years, scientists have been struggling to find ways to learn more about it. A wearable helmet being developed by General Electric could help ease that struggle.

The helmet device is being developed in partnership with West Virginia University, the University of Washington, and the University of California-Davis and will use a detector to track molecules within the body, according to a GE. The signals produced by the molecules enable the helmet to keep track of them and product high resolution images.

With the helmet, physicians and researchers will be able to “image cells and misfolded proteins in the brain that characterize neurological disorders,” Nadeem Ishaque, global technology director for diagnostics and biomedical technologies at GE Global Research wrote.

“We still know very little about the brain, and PET images are still very fuzzy and bobbly,” said Ravindra Majeshwar, who runs the functional imaging laboratory at GRC. “But this technology could improve our molecular sensitivity by a couple orders of magnitude.”

PET, or positron emission tomography, produces images of bodily functions, unlike X-ray or MRI machines that produce images of physical structures, GE explains. To do this, doctors inject tracer molecules with hints of radiation into a patient. The molecules then attach themselves to tissues.

GE says it’s developed new types of tracers that can zero in on tissues and proteins that can be present during concussions or associated with Alzheimer’s. GE, however, wants to reduce the amount of tracers needed to track movements by making use of the helmet’s sensitive hardware and software. Nadeem Ishaque, global technology director for diagnostics and biomedical technologies at GRC, said that smaller doses would “reduce radiation exposure to patients to only about as much radiation as a cross-country flight, while still delivering high resolution images.”

The small, sleek scanners that will be used on the helmet will replace decades-old bulky ones. The lightweight replacement will allow patients wearing the helmet to move freely, allowing researchers to observe the brain’s motor functions. The strength of the sensors will also enable researchers to observe hard-to-reach cells in the brain, Majeshwar explains in a demonstration video.

Earlier this week, the National Institute of Health announced a $46 million grant that will be shared among participating universities, businesses, foundations, and federal agencies with the purpose of better understanding the brain. The grant stems from President Barack Obama’s Brain Initiative, which sets out to fund more brain-related research to find out “how the brain functions in both health and disease.”