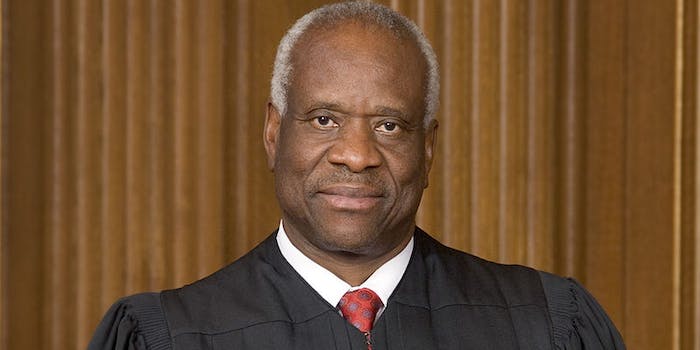 Steve Petteway, Collection of the Supreme Court of the United States/Wikimedia Commons

The worst take on the decision came from inside the Court.

On Friday, the U.S. Supreme Court handed down a decision legalizing gay marriage in all 50 states. The court’s ruling was 5-4, unsurprisingly split along partisan lines.

Anthony Kennedy, the court’s “swing vote,” wrote the majority opinion. Multiple justices in the minority wrote their own dissenting opinions in the case. Chief Justice John Roberts argued that gay marriage was a states’-rights issue instead of a federal one. Justice Antonin Scalia insisted that the question shouldn’t be decided by the courts at all, but instead left up to legislators.

On the other hand, Justice Clarence Thomas largely took aim at the idea that denying full marriage equality to gays and lesbians robs them of their dignity. In disputing this argument, Thomas, who is black, drew on historical metaphors that were highly questionable, to say the least.

Pause for a moment.

Read the quoted section above again.