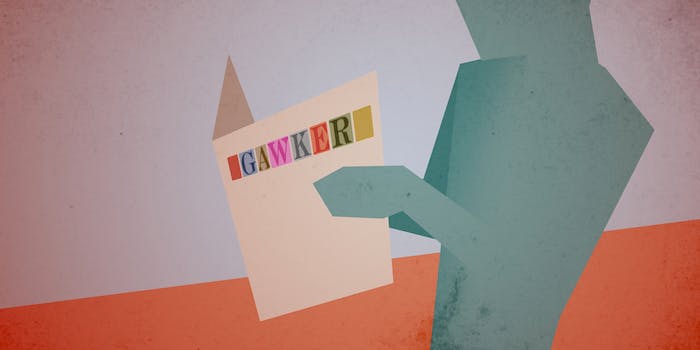 How to read all the Gawker stories Univision deleted this weekend

In one form or another, these stories will live on forever.

Univision on Saturday announced it deleted a handful of stories from Gawker’s archive citing ongoing litigation over its most “controversial” posts.

The stories—two at Gizmodo, three at Deadspin, and one at Jezebel—were removed following a vote by Gawker’s interim CEO Felipe Holguin, general counsel Jay Grant, and executive editor John Cook. (Cook was the only one of the three to defend the stories.) In a statement, Univision said its intention was to give the Gawker Media websites a “clean slate,” while hoping to “support and grow the editorial missions of the acquired brands.” Gawker.com itself was indefinitely shuttered this month, its writers reportedly transferred to other Gawker Media sites now owned by Univision.

Visitors to the pages where the deleted stories were once hosted are now greeted with a message about “pending litigation against the prior owners of the site.”

It’s easy to understand why Univision resorted to self-censorship: It acquired Gawker at auction ($135 million) less than a month ago after the company was financially crippled by legal action funded by billionaire Peter Thiel, who personally financed Hulk Hogan’s sex-tape lawsuit against the company, in retaliation for a 2007 Gawker post concerning Thiel’s sexuality.

Nevertheless, Univision was met with harsh criticism online by those who say the move indicates the new owners of the famously adversarial company have neither the inclination nor will to fight legal battles on behalf of its reporting.

The deletions also serve as a reminder that it is practically impossible to remove information from the internet. Each story has been archived so that new readers can access them while Univision can avoid the liability stemming from the kind of work that helped make the Gawker brand valuable.

Below you can find those stories in all their original glory:

1. The Inventor of Email Did Not Invent Email? (via Mario Aguilar, Gizmodo)

2. Corruption, Lies, and Death Threats: The Crazy Story of the Man Who Pretended To Invent Email (via Sam Biddle, Gizmodo)

4. Wait, Did Clowntroll Blogger Chuck Johnson Shit On The Floor One Time? (via Greg Howard, Deadspin)

Univision also reportedly discussed removing a Gizmodo article by Kate Knibbs (a former Daily Dot reporter) about Uber due to a copyright complaint. Just in case, you can find a copy of that seventh post here.

You can also find full screenshots of the aforementioned posts on Imgur.

Update 12:44pm CT, Sept. 12: Kate Knibbs’s Gizmodo article will remain online, but a photo has been replaced to address the copyright complaint.

“Univision has said that it bought Gawker Media because it believed in the work that our publications do. That work, for well over a decade, was only possible because we knew that our company leadership would defend it if it came under frivolous legal attack.

“Univision’s first act on acquiring the company was to delete six true and accurate news stories from our archive, because those stories had been the targets of frivolous or malicious lawsuits. This decision undermines the foundation of the ability of Gawker Media’s employees to do our work. We have seen firsthand the damage that a targeted lawsuit campaign can do to companies and individual journalists, and the removal of these posts can only encourage such attempts in the future.

“We condemn this action by Univision’s executives in the strongest possible terms. It sets an alarming precedent both for our relationship with our new owners and for the business of journalism as a whole. It is unacceptable for a publisher to delete legitimate and true news stories for business reasons.

“We now face the task of trying to rebuild trust with Univision and find a resolution that will allow us all to once again do the work that we were all hired to do without fearing that our parent company might fail to support us when we need it most.”

Correction: A previous version of this story claimed that two Gawker editors resigned after a post about Peter Thiel was deleted. That post is still online. The deleted post concerned the CFO of Conde Nast. We regret the error.