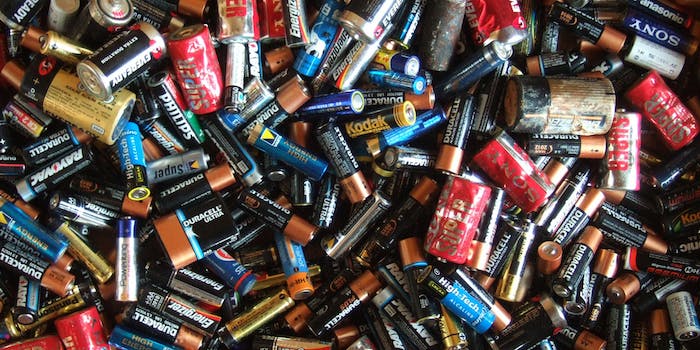 Everyone keeps telling us about the amazing advancements in batteries, but when are those actually going to get here?

You deal with batteries on a daily basis, from the rechargeable kind in your smartphone and tablet to the single-use variety that power your TV remote. Portable power is a requirement of modern life and batteries are the solution, but as well as they work now, the future promises some insane leaps in battery technology. The problem? We’re never going to see them.

OK, so maybe “never” is a bit of a stretch, but while headlines promise everything from a smartphone that can recharge in less than a minute to rechargeable batteries so tiny they could change the way companies make wearables, we never seem to actually get any of these awesome innovations at the consumer level. Here are five futuristic batteries that could change the world, if researchers ever get around to making them available to the rest of us.

Recharge with a scream

Years ago, scientists figured out that if they take some zinc oxide and stick it between tiny electrodes, it can be used to create an electrical charge simply by adding sound. Sound waves create a vibration that moves the zinc oxide to spawn the small electrical current, which could then be scavenged to give added life to a battery. This concept could be applied to smartphones—since you’re talking into them anyway—and all manner of power-hungry devices. That sounds amazing, but it’s also been almost four years since we heard anything about this technology, and it’s starting to look like just another breakthrough that will never see the light of day.

The tech gurus at MIT invented a phone battery that can be recharged in 10 seconds. Let that sink in for a second. That means that if you only had one minute to charge your phone before leaving home, you could fully power it up and still have another 50 seconds to think about how great your life is now that you have such an awesome battery in your phone. The engineers that invented it even said the battery uses common materials and that it would be “simple to mass produce.” Great, so it’s just around the corner, right? Well, the researchers first sounded off on their miraculous invention in March of 2009, so I’m guessing that’s a “no.”

Stanford associate professor Yi Cui devised a way to use sulfur cathodes in a rechargeable battery to help it resist power loss and store up to five times more energy than in standard commercial applications. In fact, the cathode arrangement Cui came up with is so rock solid that it worked flawlessly without any optimization or tweaks. “It basically worked the first time we tried it,” Cui boasted following the tests. But don’t get too excited about this world-record setting battery—which would provide electronics with a longer lifespan and less need to replace batteries over time—as it’s now been almost two years without any word of the technology being applied to a consumer device.

A battery that is the device itself

Researchers from Imperial College London want to eliminate batteries as we now think of them, especially when it comes to vehicles. Working hand-in-hand with Volvo, the group successfully created vehicle body panels that hide a secret: Sandwiched between two halves that make up the pieces of the bodywork is a supercapacitor capable of storing a huge amount of energy. Tests showed that this technology could be used to replace a standard automotive battery entirely, while also cutting weight in the process. This remarkable innovation was first shown off in early 2010, and as of late 2013, these super panels still “aren’t bound for production anytime soon.”

Mini batteries with a ton of power

Panasonic is super proud of its brand new, ultra-tiny batteries. Calling it “the smallest in the industry in terms of capacity by volume,” these mighty minis could spawn a new wave of high-tech wearables with even slimmer form factors. The promise is great, but will Panasonic deliver? The company claims to be planning monthly production of up to 100,000 units starting next year. Of course, with all these other extremely disappointing “breakthroughs” in battery tech, you probably shouldn’t hold your breath.

There are plenty of reasons why these various awesome batteries never actually find their way into our homes or mobile devices. Sometimes the technology isn’t quite as awesome as it’s being made out to be by the inventors, and other times the materials required are so insanely expensive that you wouldn’t want to pay the price anyway. Then there’s the various tin-foil-hat theories that suggest battery manufacturers are actively pushing progress backwards in order to keep us all coming back to the store for new batteries on a regular basis.

Regardless of which angle you’re willing to buy, just remember to take all those amazing battery claims with a grain of salt in the future, as chances are you’re never going to actually see them in action anyway.