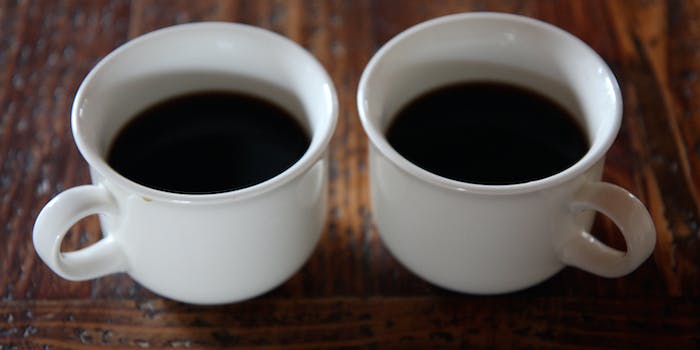 The coffee cup wars are heating up.

Ever since Keurig introduced its Keurig 2.0 brewing systems, users have been fighting back. The new unit including digital rights management (DRM) style blocks to keep unapproved brands out of its machines. The rage against the coffee machine waged by caffeine-craving masses finally has its secret weapon to win the war: the Freedom Clip.

Created by Rogers Family Company, the Freedom Clip expects to be greeted as a liberator to all coffee lovers living under the rule of Keurig. The little revolution from the Rogers Family Company isn’t completely without an ulterior motive: The company produces its own line of K-cups that don’t sport the DRM-approved seal. The clip makes pirate cups from Rogers Family and other providers work in any Keurig machine.

“I put out a product that will allow anybody to work around their secret coding system.”

The Freedom Clip isn’t the first effort to undermine the DRM, as users have been posting work-arounds and hacks for the system since it was first made available. While suggestions online range from removing screws to inserting magnets, the Freedom Clip is a more formalized solution to the problem.

“Everybody in the world has a work-around on their product. We were not the first ones out there and we probably won’t be the last one,” Jon Rogers, president of Rogers Family Coffee explained to the Daily Dot. “I took a little different approach than other people. I put out a product that will allow anybody to work around their secret coding system. I don’t care if it’s my product or somebody else’s product.”

Approved K-cups are marked by a special ink that can be identified by the Keurig machine. Any cup without the ink is rejected, “ensuring Keurig’s marketplace dominance” according to the Rogers Family Company’s website. “While other companies are quickly working to adopt this special ink to their cups we at Rogers Family Company believe that your right to choose any option is imperative. This little clip will override the Keurig 2.0 Lock Out Technology and allow most non-approved K-Cup type pods to work.”

The Freedom Cup is the latest part of an on-going feud between the Rogers Family Company and Keurig, including several lawsuits filed against the massive coffee machine maker.

In 2013, the family-owned coffee company won a patent suit filed by Keurig over the Rogers’ OneCup single serve coffee cartridge. The U.S. District Court in Boston ruled that the Rogers Family Company’s OneCup products did not infringe upon any of the Keurig patents, calling it “plainly dissimilar.” The OneCup uses a biodegradable ring and filtering material as opposed to Keurig’s own non-recyclable plastic cups, which have come under fire for environmental concerns.

In the following year, Rogers filed a lawsuit against Keurig claiming the 2.0 machines violate federal and state antitrust and anti-competitive laws. Rogers is one of 14 companies to file suits against Keurig in regards to the DRM system. Litigation is pending at this time.

Rogers believes the Freedom Cup won’t hurt his case and will in fact him help in his suit against Keurig. “It might annoy them,” he said, but explained, “I’m not doing it for greedy profit, I’m doing it to help the consumer,” he says.

Rogers Family Company is giving away the Freedom Clip for free to everyone living in the lower 48 states. Rogers told the Daily Dot that the reception has been “beyond my wildest anticipation … It’s been huge.” The giveaway serves to open up the Keurig platform to more brands including Rogers’ own, so the promotion is more of a long-term investment that will help move more Rogers Family coffee.

When prompted for comment, Keurig stated, “While we will not comment on a competitor’s products, we are confident consumers will continue to delight in the best brewing experience from Keurig. Our system directly appeals to a discerning consumer with high expectations of quality and trust in the official Keurig seal.”