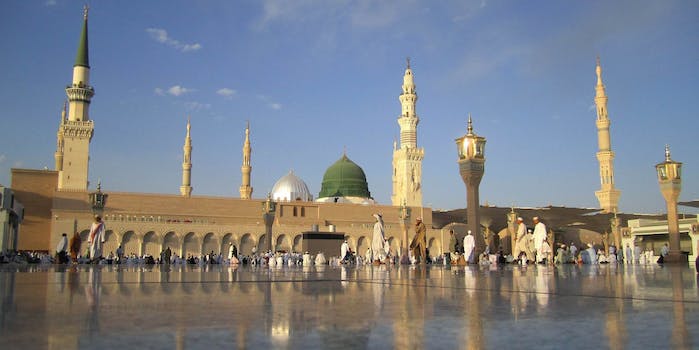 'We condemn these acts of intimidation.'

Earlier this week, reports surfaced that a judge in Saudi Arabia had sentenced a Palestinian poet named Ashraf Fayadh to death for publicly abandoning the Islamic faith. Fayadh’s fate quickly became a cause célèbre on social media, with a litany of Twitter users gathering around the hashtag #FreeAshraf to protest his death sentence.

Adam Coogle, a researcher at Human Rights Watch, told Reuters that his examination of trial documents indicated Fayadh, who was arrested in early 2014, had received the death sentence. Fayadh was sentenced to 800 lashes and four years in prion when he was initially convicted, but that punishment was increased to death upon appeal, a ruling that reportedly came down last week.

“I have read the trial documents from the lower court verdict in 2014 and another one from 17 November,” Coogle told Reuters. “It is very clear he has been sentenced to death for apostasy.”

The evidence against Fayadh consisted of a book of poetry he published in 2008, entitled Instructions Within, along with testimony from a witness who said they had heard him speaking negatively about Islam, the prophet Mohamed, and the country of Saudi Arabia.

The 35-year-old Fayadh, who is a significant figure in the country’s burgeoning artistic community, did not have legal representation at the trial.

The Guardian reports that many of Fayadh’s supporters insist the apostasy charge is just a cover for the government wanting to get retribution for his posting of a video online showing Saudi religious police assaulting a man on the street.

“They accused me [of] atheism and spreading some destructive thoughts into society,” Fayadh told the Guardian, denying charges that he was not a Muslim. “[Instructions Within was] just about me being [a] Palestinian refugee… about cultural and philosophical issues. But the religious extremists explained it as destructive ideas against God.”

After his arrest last year, a group of 100 Arab intellectuals signed a petition condemning Fayadh’s treatment. “We condemn these acts of intimidation targeting Ashraf Fayadh as part of a wider campaign inciting hate against writers and using Islam to justify oppression and to crush free speech,” they wrote.

On Twitter, activists have used the #FreeAshraf hashtag to criticize the Saudi government’s hard-line application of Sharia law and call for Fayadh’s release.

Palestinian poet sentenced to death in Saudi NEVER did what an ALLEGED witness accused. He is being martyred! #FreeAshraf #JeSuis #Paris

Death for apostasy sentence against poet Ashraf Fayadh must not be allowed to stand. #FreeAshraf #SaudiArabia pic.twitter.com/4juZwcVEJ5