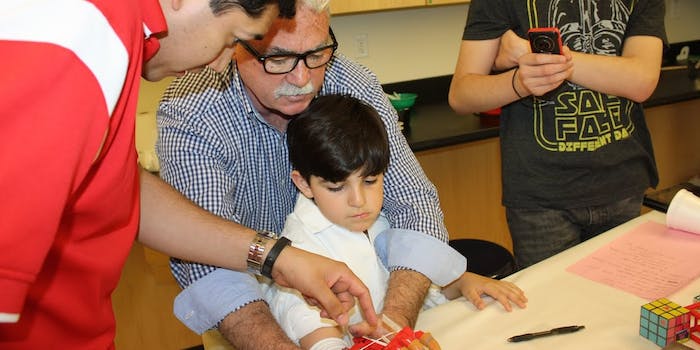 This 7-year-old just got a 3D printed prosthetic hand

The only thing that would make this story more awww-worthy is if the little boy were cute. Oh, wait, he TOTALLY IS.

Here’s your morning cry for the day: A 7-year-old boy named Frankie Grieco has just received a 3D-printed prosthetic hand. Frankie was born with a congenital amputation of his right hand, and for the first time in his life, he’ll have full usage of both his hands, thanks to 3D-printing technology.

Frankie’s story started back in January, when two Burlington, Ma., middle school teachers, Jourdan Marino and Kevin Kille, started working with 3D printers in their classrooms. Through their work with E-Nabling the Future, an organization that gives 3D-printed limbs to children in need, Marino and Kille were connected with Frankie’s mother Rachel, who told them her son had seen one of their devices on their blog and was begging for a 3D-printed hand of his own.

Although Kille had little experience with 3D printing, he teamed up with Marino to create a prototype for Frankie, spending his entire school year budget on a MakerBot Replicator 2 printer. Many of the students at their school also lent a hand (!), researching ideas for 3D-printed prosthetics on their iPads. Kille and Marino also met up with Frankie a number of times to take molds of his arm and had him try on different prototypes. 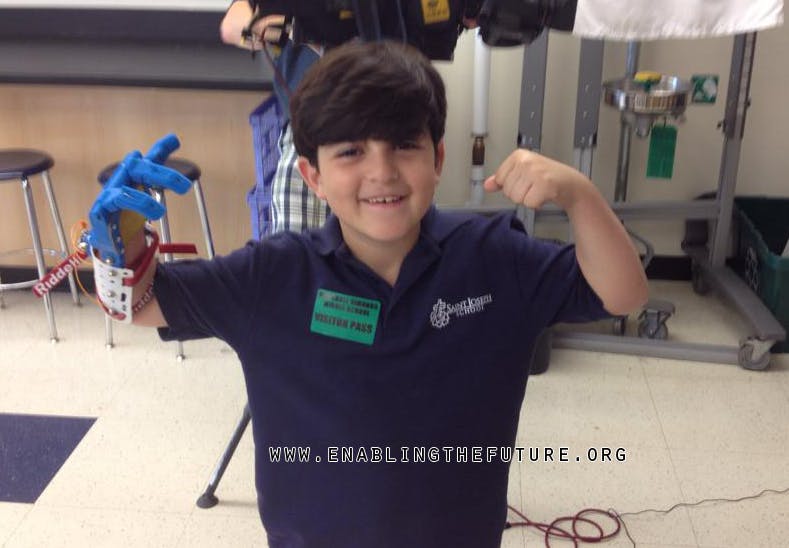 After a few months, Kille and Marino created a final version of a prosthetic hand for Frankie. In the model, the fingers of the prosthetic hand are connected to a series of cables; when the wrist bends, the cables cause the fingers to bend and move as well. All told, with the cost of the printer and the raw materials, the 3D-printed hand cost about $2,040 to make, which Kille says is actually a bargain compared to the $25,000 price tag for a regular prosthetic limb.

Unfortunately, Frankie doesn’t yet have enough strength in his right arm to operate Kille and Marino’s hand. (A Greek boy who also received a 3D-printed prosthetic hand from E-Nabling the Future last month encountered a similar issue.) So for the time being, he’s been using a custom-made prosthetic hand with three fingers, because it requires less strength to move three fingers than it does five.

In the meantime, Kille has created a machine to help Frankie build up his hand strength, so he can one day use the hand that was printed especially for him. It’s an incredibly cool story—and the hand itself looks really cool as well—but what’s even cooler is how 3D-printing technology is gradually starting to be used not just to make lipstick shades or cowboy-shaped pancakes, but to help kids like Frankie all over the world.  Sniffle.